Home Latest News FunFair Games heads back to the moon with AstroBoomers: TURBO! 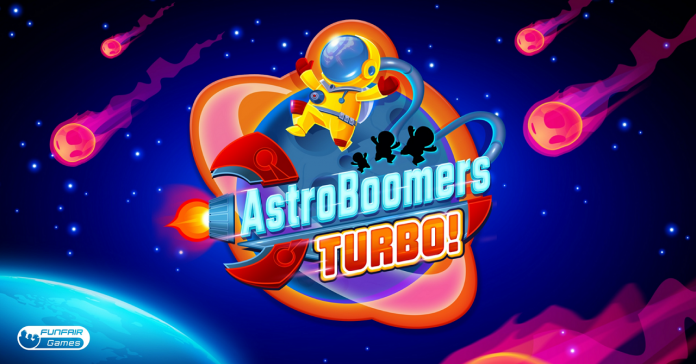 The title is a fast-paced version of the studio’s first successful multiplayer release, AstroBoomers: To The Moon!, with the boosted game offering quicker and simpler gameplay, an updated UI and higher multipliers.

With maximum wins up to 10,000x – increased from 2,500x in the original title – players must choose when to exit the rocket wisely if they are to beat their fellow astronauts and reach maximum wins, in a game that offers player-determined volatility.

Complete with sharp visuals and tension building audio, AstroBoomers: TURBO! welcomes only the bravest to embark on an adrenaline-filled expedition, as they seek to leave earth for safety.

Players place their bet before lift-off, the rocket then climbs on its quest to the moon through a sea of incoming meteors. Players can eject the ship at any time, however, staying on board for as long as possible before the rocket explodes will see them reach their max win potential.

AstroBoomers: TURBO! further strengthens FunFair Games’ expanding portfolio of multiplayer titles that has recently been boosted by innovative titles such as The Wheel of Steal and Five Ball Fiesta.

All FunFair Games titles are designed to be social, active and simple and developed for a new generation of gamblers who want a unique and engaging gaming experience.

Lloyd Purser, COO of FunFair Games, said: “We’re really excited to announce the launch of AstroBoomers: TURBO! a new and enhanced version of the game that kicked-off our multiplayer offering earlier this year.

“Since the release of our debut title, we’ve learnt a lot about our player-base and how to make an extremely successful crash-style game. In this latest release we’ve increased the excitement yet again with a huge 10,000x multiplier, faster gameplay and an improved UI.”

Kindred Reports Decline in Revenue from Harmful Gambling in Q3

BetConstruct and VBET under SoftConstruct Ltd. strengthen their positions in France