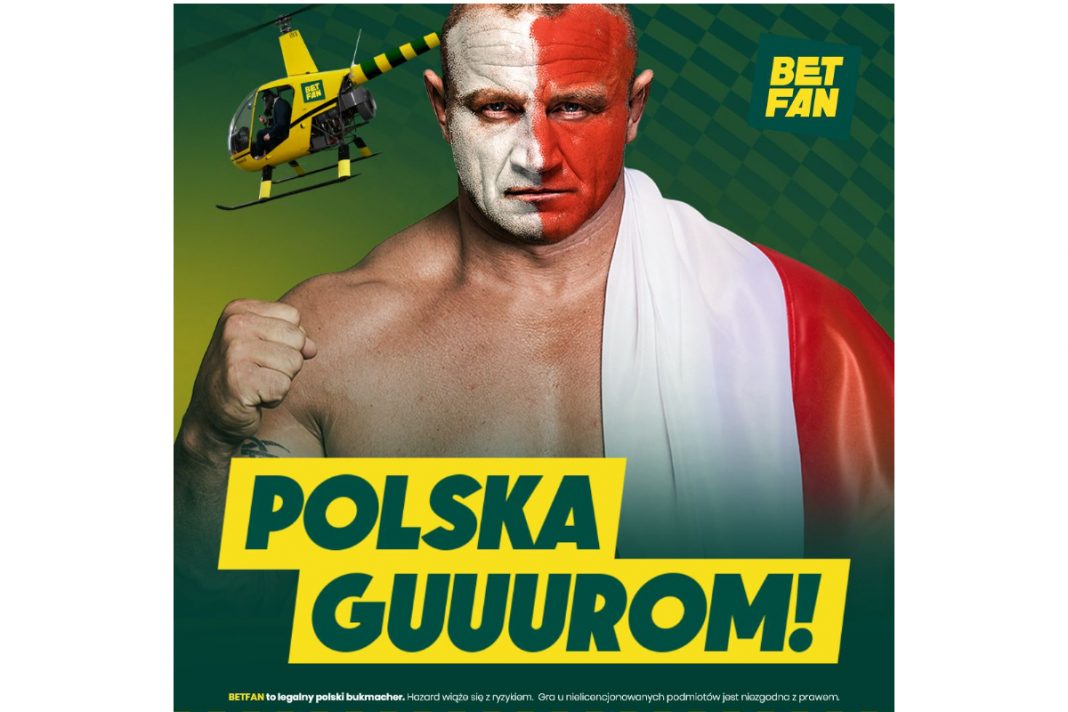 BETFAN, a legal Polish bookmaker, is launching a new marketing campaign under the slogan “Go Poland!” (Polska Guuurom!), in which Mariusz Pudzianowski, a famous MMA fighter and a world-famous strongman, is involved. From June 10, the campaign video on the Internet and on TV will promote the BETFAN offer. The promotional campaign is multi-stage and includes cooperation with youtubers, influencers and activities on own social media channels. The campaign will end with the “Fly on holiday with BETFAN” promo.

“Go Poland!” (Polska Guuurom!) is the next edition of the advertising cooperation between the bookmaker and Mariusz Pudzianowski, a titled competitor of mixed martial arts and a multiple world champion in strongmen competitions. The BETFAN’s campaign promotes a new betting offer related to matches of the European Championships on betfan.pl. Also, new users will receive a PLN 600 cashback return and PLN 50 as a free bet.

The video promoting the BETFAN offer with the participation of Pudzian and the “BETFAN horseman” will be shown on Polsat TV and on many websites and Internet channels well as on Facebook and Instagram. The popular Polish sports journalist, Maja Strzelczyk, was cast as the voice for the campaign spot.

BETFAN also invited popular youtubers to cooperate in the campaign – Koza Sport, Mietczyński and Footbreak, who host programs on the bookmaker’s channel on YT. The campaign is also supported by sports journalists, such as the aforementioned Maja Strzelczyk and Tomasz Włodarczyk. BETFAN is also to have a its own reporters, who will be at the first group match of the Polish national team with Slovakia.

The BETFAN channel on YouTube will also feature video materials with “Pudzian”, where he will take part in quizzes involving fans. One of them will be a program in which Mariusz Pudzianowski asks the audience real or absurd questions about the Polish football team. The most active fans will receive rewards and bonuses to be used on betfan.pl. As part of the campaign, the bookmaker also plans many other activities on its social media profiles.

Jakub Świsłowski, marketing director at BETFAN, says: “The coming weeks are a real high season for bookmakers and players, which is why we have prepared many new special offers, including proposals that are completely innovative on the Polish bookmaking market. All this to engage fans and raise the emotions accompanying the football festival, in which the Polish team also participates. We all keep our fingers crossed for Poles, because, according to our analysts, the team has a good chance of leaving the group, which is also in line with our slogan “Go Poland!” (Polska Guuurom!). However, although we are for “ours” at heart, according to analyzes, the French will most likely win the trophy.

Promotional activities around the offer will be carried out in June and July, and their final part will be the “Fly on holiday with BETFAN” competition, in which the main prize for activity during Euro 2020 will be a holiday flight with an additional amount for holiday expenses.

According to BETFAN analyzes, England and France have the best chances of entering the Euro 2020 finals, and it is the French that will be the winner of the tournament. Poland has a 72% chance of leaving the group, but with each successive stage its chances of winning decrease. The team led by Paulo Sousa has a 37.5% chance of reaching the quarter-finals. According to the bookmaker, Poland will defeat Slovakia in the next matches, lose with Spain, and the match with Sweden will end in a draw. For every PLN 100 bet at BETFAN for a victory with Slovakia, one can get PLN 180 – provided that a scenario that is positive for Polish fans comes true, PLN 630 in case Poland wins with Spain and PLN 287 with Sweden. France’s triumph in European Championship is a win of PLN 550 with a 100-zloty bet.

The “Go Poland!” (Polska Guuurom!) campaign was created and implemented by the BETFAN marketing department.