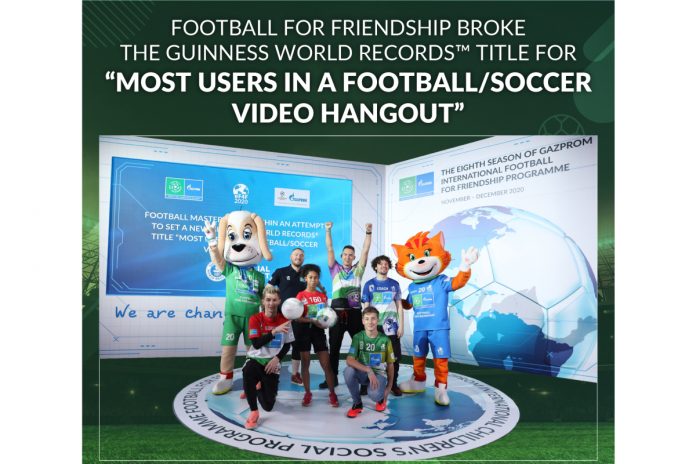 The event lasting over two and a half hours with live video feeds from France, Brazil, Russia, Uruguay, Pakistan, Ireland, Cyprus, Peru, India, Guyana, and Spain was organized by the global operator of the Football for Friendship programme, AGT Communication Group. The GUINNESS WORLD RECORDS

“We have witnessed Football for Friendship officially setting the record for the Most users in a football/soccer video hangout. What a success! All the guidelines were properly followed during the online event, and the current record of 500 users has been broken! Our congratulations on achieving this new title!  On behalf of GUINNESS WORLD RECORDS Adjudicator, confirming the achievement of the world record.

The global master class became a beautiful way to round off the first season of the international Stadium Is Where I Am YouTube show, launched by Football for Friendship. From July to December, the world’s best freestylers and footballers taught children football tricks, shared the secrets of sporting skills, and gave away unique prizes.

“The Stadium Is Where I Am is a very useful project, where you can share your experience with young people from all over the world! It is a great honour for me to inspire young people and pass on my love for freestyle football so that this sport can continue developing further. I hope they will continue training and never give up, just like me”, supports the initiative the reigning freestyle champion Melody Donchet, sharing her impressions.

The 2020 season of the Football for Friendship programme is held online. The season finale will be broadcast live on December 9, 2020.

Behold The Cyber Future In The Newest Slot By Endorphina