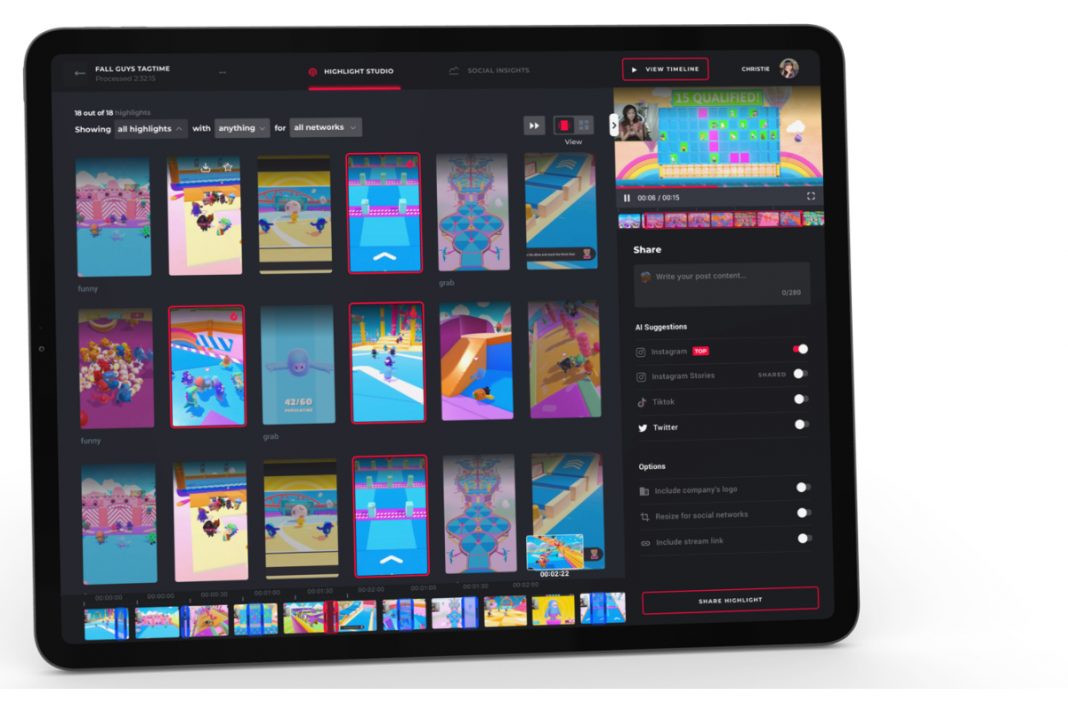 Reading Time: 3 minutes
The short video creating platform invites all gamers and gaming companies to claim their free “personal AI Highlights Producer”.
What if any gamer who streams could create immediate highlights from their livestreams and feed their social channels with the best and most captivating moments of their playthroughs? While this sort of capacity is typically available only to the resources of established streamers, companies and esports teams with the help of experienced media teams, Replai is offering a solution to passionate content creators who balance their streaming with jobs, families and day-to-day life looking to grow their follower base through their AI-based automated highlight creator platform.
Replai is a real-time content production platform that offers massive time and cost savings by rapidly creating high-quality video highlights from thousands of hours of live streams, streamlining all the needed editing, clipping, rendering and sharing of video in just 3% of the time. Following a successful funding round in June, Replai has been quickly expanding its user base: “In September, Replai users produced over 15 000 highlights from around one million hours of streams processed. We estimate that these served an audience of around 11 000 000 people in social channels”, explains Diogo Pereira, director of marketing and community for Replai. “Only recently we opened the access to Replai beyond our previous enterprise-exclusive level as we’ve seen the massive demand for a solution like this from end users.”, he adds. Irina Pencheva, Head of Social at SK Gaming, testifies to such efficiency: “The projects I created with Replai are definitely something that helps the team’s operation to release content as games are happening”.
Replai was born from the context of increasing importance of community content as a powerful marketing strategy for brands in gaming, together with the rise of short-video platforms like Tik Tok. After partnering with major companies across the globe like PUBG, SK Gaming or GamersClub to help them automate content creation, the team witnessed a rapid demand from everyday streamers. “Replai can be an absolute game changer for millions of streamers who don’t have the time, resources or money to scale content as they struggle to balance streaming with their life”, João Costa, Replai CEO, explains. “We help them save their time editing highlights dramatically. Replai enables them to do in one minute what took at least one hour.”
Such usage comes from all types of streamers, from those with thousands of followers to aspirational ones who want to grow their channels by stimulating the virality of their content. “It’s been fantastic to witness the enthusiasm of the community.”, Diogo says. “We think of our Discord as a place to celebrate live streaming, where our users and ambassadors come together to exchange ideas, tips, and play together”. Nikolarn is one of such streamers that at around half a million followers who found Replai to unlock potential for all types of content creators: “Short-video content is essential for me to keep my viewer base engaged and growing across all of my social outlets. It’s next to impossible being efficient in producing that type of content daily, especially after long streaming sessions. Replai solves a major bottleneck for professional streamers, and as such the impact is even bigger for streamers who don’t have dedicated staff at their disposal or simply lack the editing skills or time to produce that type of content.”
What’s next for Replai? “We keep expanding our strategic partners in the industry, but we have a strong belief in the importance and improvement of our streamer community.” Diogo adds . “We’ve seen an unbelievable adoption of Replai from every type of streamers: from firefighters who stream in-between emergency calls, to VR-enthusiasts who are conquering new audiences. That excitement fuels our ambition to make Replai a platform that every streamer in the planet will want to use. We want to put Replai in the hands of every streamer who wants to create more exciting content but doesn’t have the time or resources to do it.
“We invite everyone to try Replai for themselves – all it takes is a sign-up and inserting a stream URL – and become a part of our community.” The team is also committed to improving the product continuously, encouraging user feedback for new feature developments in their Discord.
Replai is currently free to use on a 14-days trial, after which users can simply refer friends to join Replai in order to keep the account fully unlocked. The Replai Partner & Ambassador Program allows top Replai users to receive perks and have access to beta features.