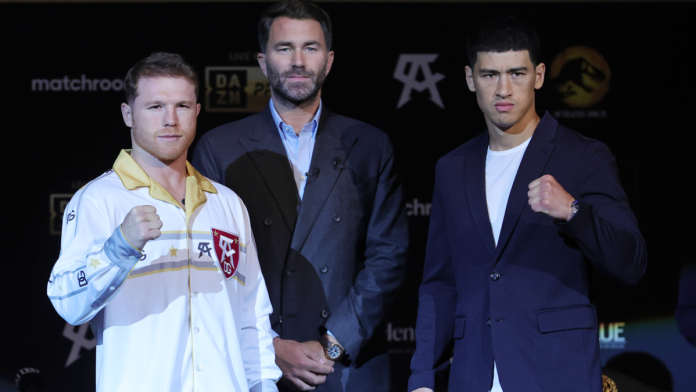 Pound for pound boxing superstar Saul Alvarez returns to the ring on Saturday 7th May when taking on Dmitry Bivol at the T-Mobile Arena, Las Vegas. This is another step up in weight for the famous fighting Mexican who continues to defy logic as he aims to take the WBA light heavyweight world title. This is a fighter that won his first title at welterweight and has been a success in every weight category he has entered since. But has he bitten off more than he can chew at the third-highest division? Fight fans can’t wait to find out.

If Canelo is to add another world championship belt to his already sizeable haul, he must defeat a naturally bigger and stronger opponent who is used to trading blows with light heavyweights. Bivol knows he enters as the underdog to win this contest, but the current keeper of the WBA belt is confident he has the physical attributes to silence his doubters. Is Bivol the man to finally halt the Canelo express train?

The top sportsbooks certainly don’t think so, and traders in Las Vegas have Alvarez priced as the most likely winner of this bout. Followers of professional boxing can make their predictions at VIP sports betting sites, and there are more options available than you may think. You can keep it simple and pick the fight result – Alvarez, Bivol or the draw. There are also specials, such as the method of victory, total rounds, number of knockdowns, the bout to be won in an odd or even number of rounds or a fighter to be knocked down but go on to win.

Where does the smart money go? You’ll find out in this big fight preview, and we have enlisted the help of former professional boxer and current fight-game betting writer Frankie Monkhouse who makes his predictions. Let’s get ready to rumble.

Alvarez is creating a legacy

Canelo will duck between the ropes at the sold-out Las Vegas arena on fight night with a stunning professional record detailing 57 wins against one defeat and two draws. The only loss on his card was inflicted by the self-proclaimed “Best Ever” Floyd Mayweather, who collected a convincing points victory in Sin City. That was back in 2013, and much has changed for the beaten man since. Alvarez hasn’t lost a bout since, despite ranking among the most active fighter at championship level in the world. He is a gladiator that simply loves to compete, test himself against top-level opponents and win world titles.

Saul isn’t happy simply keeping busy and winning fights. He is determined to create a lasting legacy that will take many years to better, if possible. Since losing to Mayweather, the hit-list of Canelo includes Miguel Cotto, Amir Khan, Julio Cesar Chavez Jr, Gennady Goloivkin, Callum Smith and Billy Joe Saunders. Both Smith and Saunders were unbeaten world champions before running into the Mexican, and he dispatched both in the kind of fashion that left followers suggesting neither will return to the top level of the sport, such was the savage beating they received.,

We last saw Alvarez in action against Caleb Plant in a bout he was expected to win, and one, he got the desired result without too much fuss. There was no lack of needle between Alvarez and Plant, but when the bell went, there was only ever going to be one winner. Canelo dominated the fight before finishing it in round 11. Caleb was dropped to the canvas twice before referee Russell Mora stepped in to save him from any further punishment.

All the talk and hype pre-fight focuses on Canelo and his strengths, but what about Bivol. Who is the champion, and what does he bring to the table? The Californian-based fighter brings a perfect 19-fight record, with 11 of those wins coming inside the distance to create a 58% KO average.

He scored a stunning 12-round points decision over Craig Richards in Manchester, England, on the undercard of Derek Chisora v Joe Parker and followed that with another win on the scorecards in Russia last time out, beating Umar Salamov. He is a hard-hitting fighter, but each of his last six wins have come on points, and he’ll aim to take Canelo into the later rounds in Vegas.