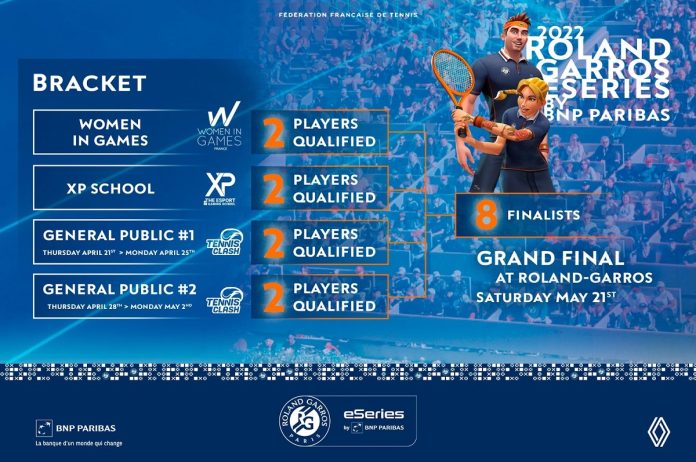 Roland-Garros eSeries by BNP Paribas, the biggest and most inclusive eTennis competition in the world, has today revealed details for the fifth edition of its annual esports tournament. This year marks the switch to a mobile esports format, partnering with the world’s most popular mobile tennis game, Tennis Clash, from Wildlife Studios. The event, organised by Fédération Française de Tennis (FFT), will see eight finalists progress from four separate qualifying events, to compete in a Grand Final at Roland-Garros itself on Saturday, May 21 to be crowned the eTennis world champion.

To mark the fifth anniversary of the tournament, FFT has increased its commitment to eTennis through a host of significant changes. This includes a switch to a mobile esports format played on Tennis Clash, the world’s leading mobile tennis video game. The video game, published by Wildlife Studios, has achieved 90M downloads across 241 countries, giving more eTennis enthusiasts the opportunity to compete in the tournament. To further entice players, the iconic Philippe-Chatrier court will be recreated for all matches within the game, they will also get the chance to purchase Roland-Garros strings to boost their character’s performance through the Tennis Clash store.

“Based on the global popularity of Tennis Clash, it’s only fitting that this game be selected for the Roland-Garros eSeries by BNP Paribas competition,” said Barak Shaked, Game Director for Tennis Clash, “we’re honored to have been chosen for this prestigious tournament and are proud of this partnership.”

This year also brings changes to the format of the event, with four qualifying competitions offering eight players the chance to compete at Roland-Garros in the Grand Final. To further increase participation and diversity, Roland-Garros eSeries by BNP Paribas has partnered with Women in Games (WiG) France for one, female only qualifying event. Women in Games, a not-for-profit organisation that provides support for women and girls throughout the games industry, has a global network of more than 50,000 members and is active in 53 countries across the world. The partnership is designed to encourage more females to enter the illustrious tournament and guarantees two female competitors the chance to compete at the Grand Final.

Taking place alongside the WiG France female only qualifier will be a qualifying competition held in partnership with XP School (The International Esports & Gaming School). The final stage of both qualifying events will take place on Thursday, April 28, broadcast live on Twitch by popular French streamer Rivenzi, who will be joined by LittleBigWhale, and Ponce on the show. The four finalists from both qualifiers will also be offered a unique opportunity to further their pro-gaming careers through a two-day coaching experience organised by leading French esports organisation, Team MCES, at its Gaming Centre in Marseille ahead of the Grand Final itself.

“By hosting the world’s biggest eTennis tournament with a final at Roland-Garros, the FFT is once again demonstrating its ability to connect generations and innovate. Mixing traditional sport and esport, developing eTennis for all, these are strong issues for our federation, which wants to be a trailblazer. We are delighted to allow players of all levels and backgrounds to participate in this great tournament, which will make a special place for women this year. This tournament promises to be a very popular event. I warmly thank our historic partner BNP Paribas and Renault, who’ve just joined us.” Gilles Moretton, FFT President.

BNP Paribas has once again returned as the main partner of the eTennis tournament –  the only eTennis competition to be organised by one of the four Tennis Grand Slams – further showcasing its own commitment to eTennis. Joining BNP Paribas as a partner is Renault, which has been named an official partner of the event. Both BNP Paribas and Renault branding will be visible on the virtual Philippe-Chatrier Court, recreated in Tennis Clash.

“BNP Paribas is delighted to support Roland-Garros eSeries by BNP Paribas for the fifth consecutive year. As the competition becomes more open to a wider and younger audience, it gets easier to connect tennis and gaming. This year we are particularly proud to contribute together with Women in Games, to the development of female gaming, an initiative that is a part of the long-term strategy of BNP Paribas aimed at the technological inclusion of women, that we promote through our various entities around the world.” Vincent-Baptiste Closon, Head of Partnerships, Sponsoring & Events at BNP Paribas.