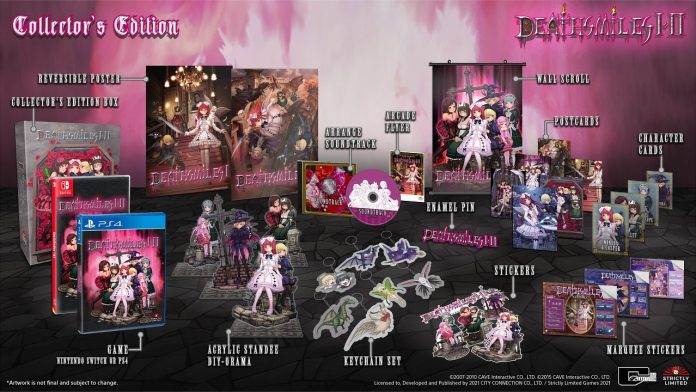 Strictly Limited Games, together with City Connection, are happy to bring some side scrolling, shoot ’em up arcade action from legendary developer studio CAVE, to the Strictly Limited Games Shop! Deathsmiles I・II coming for Nintendo Switch and PS4 as Limited Edition and Collector’s Edition. Both Editions of the acclaimed Shoot ‘Em Up series will be available for pre-order from November 7th, 2021, only at Strictly Limited Games.

Through the Gates of HellFire!

With its heavily influenced occult and gothic horror presentation, Deathsmiles’ ambient, anime styled and sinister presentation is already very much venerated. The Strictly Limited Games editions bring a rich package of Deathsmiles action to your home console, including:

Enter the world of Gilverado, a kingdom plagued by hideous monsters and tortured souls. Players can select from several different angels with unique powers and battle against a storm of enemies pouring out of Hell’s gates! As with the best of shooters, skill, hand to eye coordination, along with total concentration are essential as you fight your way out of tight spots when you are surrounded by enemy units and bullets from both sides of the screen. Deathsmiles I・II will keep you on your toes as you dodge and weave through complex enemy fire, beautifully crafted by the modern masters of shmup.

Six (four in Deathsmiles) playable angels to choose from, each with their own faithful familiars.

Play a great variety of gothic-themed stages in the order of your choosing.

Get yourself an awesome limited Edition for pre-order at the Strictly Limited Games Shop.

The Limited Edition comes with a manual and is available for 49,99€ and limited to 2,800 copies for Nintendo Switch and 1,500 copies for PS4.