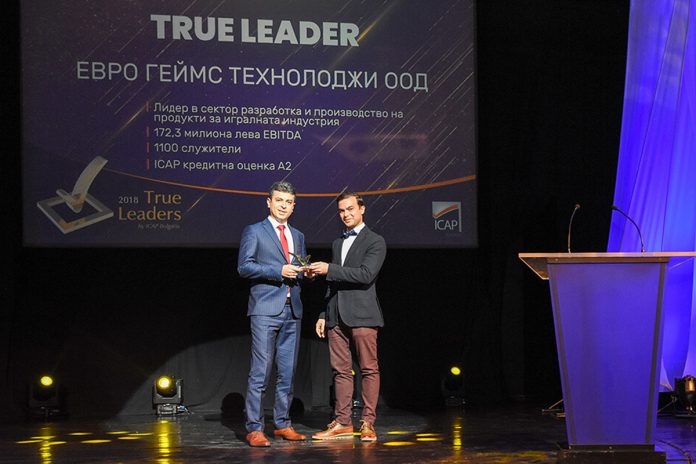 EGT received a recognition for its excellent results for 2021. At a special ceremony, held at the Grand Hotel Millennium Sofia on 08 December, the company took the “True Leader” award, distinguishing the most successful 300 enterprises from all industries in Bulgaria. EGT is a leader in its sector “Development and manufacturing of products for the gaming industry”.

The initiative “True Leader” is organised for tenth consecutive year by ICAP CRIF, the market leader in Credit Risk & Business Information Solutions in Southeastern Europe. The ranking doesn’t depend on jury or voting from public. It is based only on measurable and objective indices for which is used officially published information. The participating companies have met four main criteria: they are among the most profitable enterprises in 2021 (measured with EBITDA: Earnings before interest, taxes, depreciation and amortisation), have kept or increased the number of their staff in the relevant year in comparison with the previous, stand out with high creditworthiness (Credit Score A1 to B2) and hold leading positions in their industries.

“It is a great honor for me to accept this accolade on behalf of EGT. Despite the complicated situation, our company achieved a lot in 2021 and the merit goes to our team, without whose inspiration and dedication our success would not have been possible,” Vladimir Dokov, CEO of EGT, said.

2021 was a challenging year for the Bulgarian economy and EGT in particular. The company has successfully dealt with all the difficulties, having recorded the same or even higher sales rates in numerous jurisdictions compared to the previous period, entered new markets, released many new products and increased the number of its international offices, which currently are 28.

Unibet Becomes an Official Partner of NHL in Sweden

National Gambling Education and Support Programme Launched for the UK