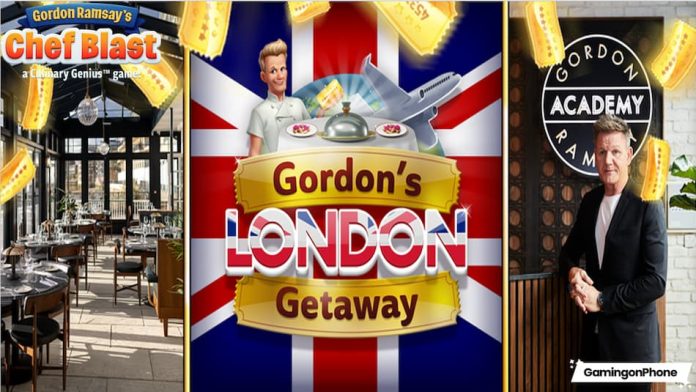 Outplay Entertainment, the largest independent mobile game developer in the UK, has partnered with Gordon Ramsay to set a new challenge for players of its culinary mobile puzzle game, Gordon Ramsay’s Chef Blast, to win an all-expenses paid trip to London.

For the chance of winning the free-to-enter competition, starting at 10:00 am GMT on December 16, players must defeat 10 levels in the game and enter before the competition closes on January 13. The competition prize includes free travel, accommodation at a central London hotel and exclusive dining experiences at Gordon Ramsay’s Lucky Cat and Bread Street Kitchen & Bar. A cookery class at the Gordon Ramsay Academy will also be included in the prize, where the lucky winner will learn to make the Culinary Genius’ signature dish, a Beef Wellington. The competition is open to players in the US, Canada and UK, and the winner will be notified on January 15.

In addition to the giveaway, a new Side Map event is taking place from December 23 until December 28. Players will collect, earn or buy in-game tickets by blasting through levels, unlocking the ability to travel to London in-game and play a series of special levels to test their skills. Exclusive recipes and kitchen accessories will be available to win, including the winter exclusive recipe of Kabocha Squash Mac ‘n’ Cheese, alongside Pork & Chive Dumplings with Black Vinegar Dipping Sauce. The latest Side Map event follows the Paris Side Map event, which took place on December 2.

“It’s great to finish the year with an exclusive new giveaway for Gordon Ramsay’s Chef Blast, providing our players the chance to win a luxury London escape for two, including an amazing dining experience at two of Chef Ramsay’s restaurants, plus an opportunity to level up their cooking skills at the Gordon Ramsay Academy. Coinciding with this, we’re transporting our players to London in-game with our latest special event where players can enjoy an exclusive set of levels and the opportunity to win rewards,” Richard Hare, President & Co-founder of Outplay Entertainment, said.

Evoplay expands in Estonia with Kingswin