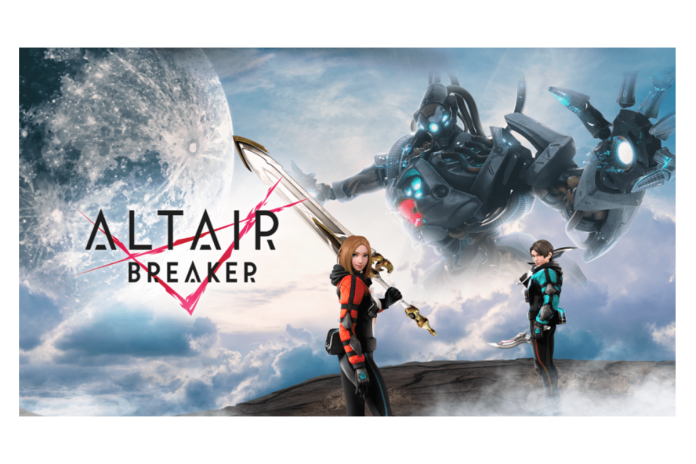 Thirdverse Inc. is pleased to announce that its new VR multiplayer sword-fighting action game, ALTAIR BREAKER, will be available for purchase in the summer of 2022. The newest title from Thirdverse leverages the expertise from the company’s first and most successful VR title “SWORDS of GARGANTUA”, and features top talent, including Noisycroak famous composer Hideki Sakamoto to direct the game soundtrack and popular anime and games voice actor Xanthe Huynh to dub navigator character “Stella”. The game is set on an abandoned city floating in the void of the VR world Altair, where players can dive in to unravel the mysteries of this AI-controlled world.

Thirdverse will offer the first hands-on demos of ALTAIR BREAKER to visitors of the annual Game Developers Conference in San Francisco from March 23-25 at the Moscone Convention Center North Hall in booth N3011.

Check out the preview trailer for ALTAIR BREAKER here: https://youtu.be/2cMwq9oGXuI

◆ Transcendent VR Sword-Fighting Action
Designed with casual players in mind, this title brings a “new generation of VR sword-fighting action” to the VR world. The game features several unique aspects and actions that would be impossible to perform in the real world, such as high-speed sword-fighting action, blow-ups, aerial combos, and wide-range attacks with special moves. ALTAIR BREAKER also enables multiplayer for up to four players and cross-play between Meta Quest 2 and PCVR, leaving players free to be matched with users from all over the world and communicate via voice chat.

◆ Introducing the World of ALTAIR BREAKER
The game takes place in an aerial city located in the VR world called “Altair”, where AI was created in the past to help and develop singularity-like creatures. Once a group of islands covered in a sea of clouds, most of the islands have collapsed to this day. Now they are nothing but ruins floating in the void, with the experimental battle AIs left behind and free to wander around. Players are guided by the humanoid AI that observes this land and challenged to fight against the vicious battle AI.

◆ Popular Anime and Games Voice Actor Xanthe Huynh to dub navigator character “Stella”
Xanthe Huynh is a Los Angeles actor with a degree in the Dramatic Arts from the University of California, Irvine. Represented by Dean Panaro Talent, she’s been working in voice over for over 10 years and is known for roles such as Palla-Palla from Sailor Moon SuperS, Tsugumi in Scarlet Nexus, Miggy in Aggretsuko, Maquia in Maquia When the Promised Flower Blooms, Haru in Persona 5, Marianne in Fire Emblem Three Houses, Kanon in Neo: The World Ends With You, and Vatista in Blazblue Cross Tag Battle.

2022 WORLD SERIES OF POKER® IN REVIEW: WEEK FOUR HIGHLIGHTS AND WHAT TO LOOK FORWARD TO

LatamWin Partners with Edict to Distribute Merkur Games in LatAm