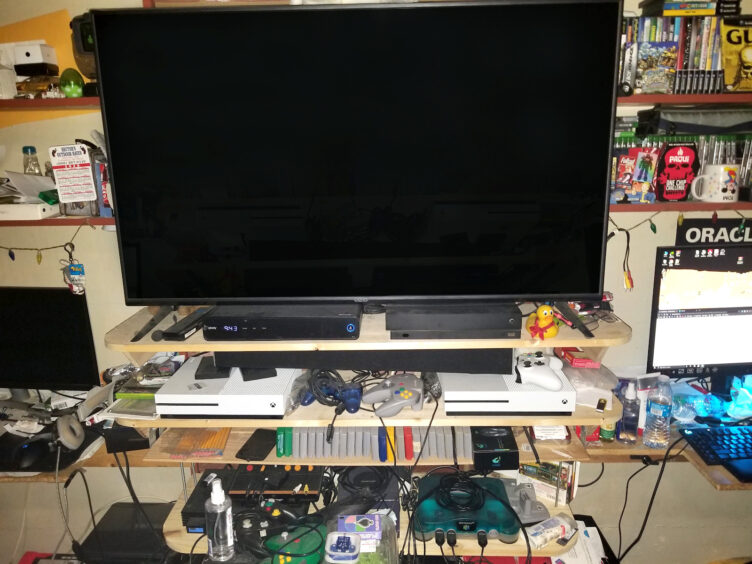 After weeks of searching, FandomSpot can now reveal the lucky winner of The Best Gaming Setup, a competition launched to find a gaming rig that displayed the biggest passion and love for gaming. After the plethora of entries from the UK and US were carefully scrutinized by a team of expert-gamer judges, FandomSpot is thrilled to announce the winner: 19-year-old Thomas from Beverly, New Jersey, USA

Thomas’ setup features three screens, shelves lined with current gen and retro games, along with multiple consoles including three Xbox One’s, an N64, a Gamecube, and a PS2, along with an Ataria 2600, NES, Xbox, and more that don’t even fit in the photo. There are empty water bottles because Thomas knows it’s important to stay hydrated during long gaming sessions, and plenty of glasses cleaner to keep his vision clear. Plus, a rubber duck, because who doesn’t want a rubber duck as a good luck mascot?

Thomas’ setup displays his passion for gaming and has real character, with some of his favourite games of all time including Animal Crossing, Mario Sunshine and Pokémon Channel. It proves that you don’t need to spend thousands on a fancy rig to showcase your love and dedication to gaming.

When told he was the winner of this prestigious award, Thomas said, “I entered it on a whim, using a photo I hastily took from my phone right before going to bed; there was not a second that went by that I thought I was going to win anything. So I am shocked, yet grateful, that I won the competition.”

Along with bragging rights that he’s the owner of the best setup, Thomas is also the winner of $250 of Steam vouchers he plans to spend on Hunt: Showdown and Borderlands 3 for himself and his brother.

Eyecon sets its sights on expansion through Microgaming’s platform