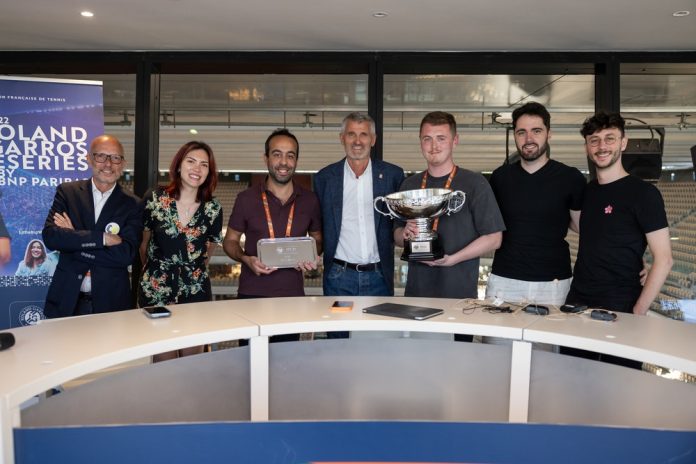 The Grand Final of 2022 Roland-Garros eSeries by BNP Paribas – the biggest and most inclusive eTennis tournament in the world – has concluded, with William Foster (Fozzy) from Great Britain securing victory to become the fifth ever winner of the tournament.

Fozzy, who overcame 238K+ other entrants from the qualifying stages to claim the eTennis world champion crown, defeated Anass Benghazi (Anteo) from France in a best-of-five match final, winning 10-5 10-4 9-11 10-3.

“I am extremely proud and happy. It was an honor to compete in the grand final inside Philippe- Chatrier court. The tournament was an incredible experience and I will never ever forget it,” William Foster, 2022 Roland-Garros eSeries by BNP Paribas champion, said.

The Grand Final, which took place in a dedicated gaming area located at the top of the prestigious Philippe-Chatrier court, saw eight finalists who qualified from one of four qualifying events compete against each other in a best-of-one, round-robin competition. The finalists included representatives from five countries, including Great Britain, France, Columbia, Germany and Iran. Following the conclusion of the round-robin tournament, the four best players progressed to the semi-final stages of the competition, where they played a best-of-three match. Fozzy and Anteo then competed in the final, before being presented with the winner and runner-up trophies by Gilles Moretton, French Tennis Federation (FFT) President, and their prize money of €3500 and €1500 respectively.

“Congratulations to William Foster for winning the 2022 Roland-Garros eSeries by BNP Paribas! We were amazed to see how tough the competition was this year and we even saw a record breaking number of participants enter the event from all over the world. In 2022, we made huge steps to make our competition more accessible to everyone, which included guaranteeing at least two women had the chance to compete in the Grand Final for the very first time through our collaboration with Women in Games. As the only Grand Slam to organise an eTennis tournament, we are honoured to fulfil our mission to promote tennis and eTennis worldwide. We are also proud to share this ambition with our partners BNP Paribas and Renault, and look forward to developing the event further in the future,” Gilles Moretton, President of the French Tennis Federation, said.