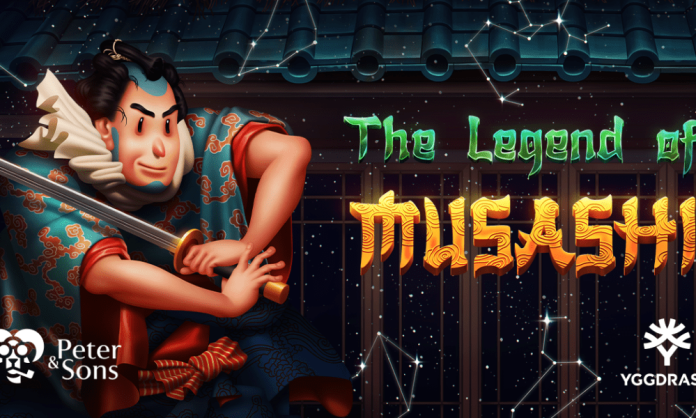 Yggdrasil, the leading worldwide publisher of online gambling content, has teamed up with Peter & Sons to forge The Legend of Musashi, a slot inspired by Ancient Japan featuring the greatest master of the double blade.

Those brave enough to enter Musashi’s dojo are met by high volatility gameplay that can see wins up to 20,000x the stake by way of several bonus features and mechanics, including ten Power Mode levels, Monster Multipliers,Monster Free Spins and a Super Free Spins game that triggers after completing all Power Mode levels.

Collecting 65 scatters in a meter triggers one of ten Power Mode levels. Power Mode is a well-known collections feature which rewards loyal players and adds an element of progression to slot games. During the Power Mode, a random number of lives between three and ten are offered. Whenever a Wild symbol appears on the screen it will turn into an Expanding Wild which uses up a life, with the mode ending only once all the lives are gone.

A horizontal reel containing 10 different Power levels is presented at the bottom of the grid. Collecting scatters in a meter triggers a Power level awarding up to ten random lives, and for each Life, any appearing Wild is transformed into an Expanding Wild. Completing all levels, which takes around 650 scatters, launches the Supers Free Spins game.

A win multiplier increases by x1 every time a winning spin occurs during the Monster Multiplier feature and symbols cascade to allow for new ones. When there are no more cascades, the multiplier resets.

Whenever three scatter symbols land on the reels, ten Monster Free Spins are awarded during which Wild symbols are converted to expanding Wilds, and any landing scatter grants an additional Free Spin and increases the multiplier’s base value. Super Free Spins trigger when completing the ten Power Mode levels, offering the same features except the Monster Multiplier does not reset between spins, providing even greater win opportunity.

Those wishing to skip base gameplay can buy their way into the Free Spins where a minimum of ten or a maximum of 16 Free Spins are available. Additionally, players can buy into Power Mode levels, speeding up their journey to Super Free Spins.

“We’re delighted to be able to release yet another visually stunning slot alongside Peter & Sons that’s full of entertaining bonus features and mechanics. We couldn’t have asked for a better game to sign off the year!”

“2022 has been a fantastic year for Peter & Sons when it comes to releasing top-tier games with Yggdrasil, and The Legend of Musashi epitomises everything we’re about and we expect it to perform exceptionally well as a result.”

Play’n GO Scare Up Some Fun with Helloween

Wizard Games gets ready for Christmas with Santa’s Fortune