Home Latest News NAPOLEON VS RABBITS HOPS ONTO THE RELAX PLATFORM FOR A FLUFFY 15... 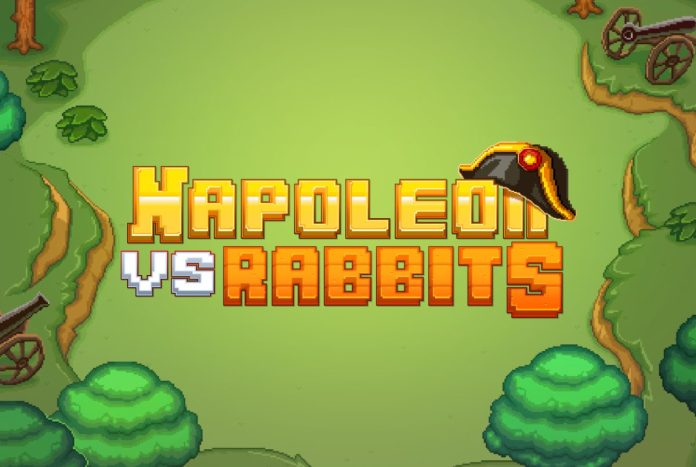 Have you ever witnessed a rabbit swarm? The year is 1806. We visit a Parisian estate where a rabbit hunt is underway. But things don’t go to plan, as a 1,000 strong rabbit revolt sends Napoleon and his army running for cover. You can watch the bunny siege play out in Napoleon Vs Rabbits, Blue Guru’s latest action-packed release.

Napoleon Vs Rabbits is born of a partnership between Blue Guru and Relax Gaming’s Silver Bullet program. The game’s pixel art design pairs well with the playful theme, and the 7 x 7 cluster play grid adds to the game’s fantastic visual energy. But this deceptively cute game comes with an edge, concealing high volatility that keeps you at the edge of your seat throughout. The cascading reels are supercharged, each one an opportunity to trigger any of the slot’s rewarding special features – as well as multiple wins per spin.

The Rabbit Run feature sees Napoleon himself appear beside the grid, setting loose more bunnies which convert Mystery Symbols, swarm Napoleon Wilds and unlock Mystery Rabbit Boxes – which are the key to releasing the Free Games feature. In the Free Games, you’ll get seven tries to build up cash wins with multipliers, extra spins, and achieve the coveted maximum prize of almost 3,900 times the bet. Blue Guru is also considerate of impatient players, offering them the chance to buy into the Free Games feature to instantly trigger the most thrilling aspect of Napoleon Vs Rabbits.

Kristian Hassall, Commercial Manager at Blue Guru said: “Napoleon Vs Rabbits isn’t your typical December release. We gave centre stage to bunnies rather than reindeers, but the result is equally uplifting. Storytelling and humour is at the heart of every Blue Guru project, keeping players engaged through rewarding and intricately entertaining gameplay.”

Simon Hammon, Chief Product Officer at Relax Gaming said : “Relax Gaming’s Silver Bullet program is an ideal partner for a studio like Blue Guru, and Napoleon Vs Rabbits is a prime example. We contribute our proven expertise and distribution strategy, while allowing Blue Guru to honour the creative process and continue to produce quality entertainment.”

PRAGMATIC PLAY IS MAKING IT A VERY MERRY CHRISTMAS WITH €100,000 GIVEAWAY TO OPERATORS