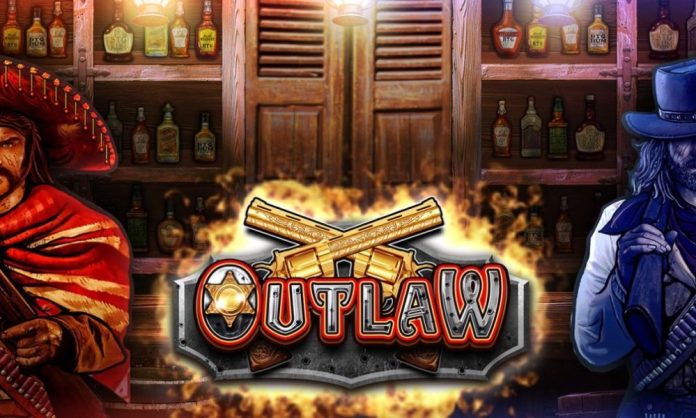 Outlaw™, the new Wild West-themed game from Big Time Gaming, is set to ride into town on November 16 on the Light & Wonder Platform, before going on general release a week later.

This Megaways™ slot is packed with more features than you can shake a six-shooter at, and it’s as volatile as a desperado with an itchy trigger finger. So maybe it’s time to saddle up for the ride of a lifetime and take a shot at one of the most eye-catching releases of the year.

This is also the third in a trilogy of BTG games inspired by and using the music of British rock band The Cult. Outlaw (the song) appeared on the band’s 1987 album, Electric. Two other tracks from that record, Lil’ Devil and Wild Flower also became the names of hit BTG games.

Outlaw™ (the game) employs BTG’s revolutionary and award-winning Megaways™ mechanic, which means there are up to 117,649 ways to win in the base game. You can also lasso yourself a magnificent x7 win multiplier.
How about the bonus game? Well, there’s a choice of two. There’s the Fallen Angel Free Spins round, which is chock-a-block with Sticky Wilds, or the Dizzy in the Head Free Spins round if you’re a fan of multiplier ladders. Look out for the Gold Megascatter, which can trigger enhanced free spins rounds for some really big wins.
Remember, you have the option of buying directly into the bonus rounds with BTG’s Bonus Buy™feature. Purchase Free Spins for 70 times stake or Enhanced Free Spins for 300 times stake. Meanwhile, with Win Exchange™, if you win between 25 and 100 times your stake, you can choose to swap the entire win for the chance to be awarded 7/8 free spins.

Nik Robinson, BTG CEO, said: “With its pulsating rock soundtrack from The Cult and cool Wild West imagery, this is my favorite of our latest releases. It has noise and energy, and it’s packed with cool features. It’s early days, but I think we could be looking at a hit.”

Dylan Slaney, Light & Wonder CEO iGaming said: “This game oozes cool. It’s really strong output from a company that is pushing the boundaries of how we think about casino gaming with each new release. We’re delighted to have the exclusive on this because it is top, top content.”

German States in Discussion Over Possible Transition Period for iGaming