Home Latest News The wildest dogs in the west return in Yggdrasil and Reflex Gaming... 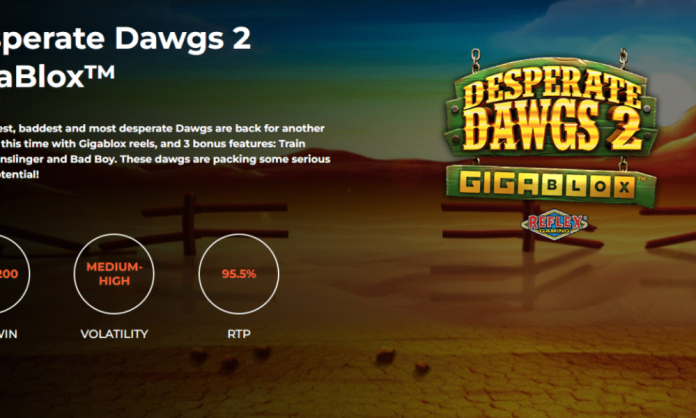 Yggdrasil and Reflex Gaming have teamed up to deliver a new slot boasting the biggest, baddest dogs in town alongside even bigger symbols in Desperate Dawgs 2 GigaBlox™.

This feature-filled 6-reel, 40 payline title utilises giant symbols up to 6×6 in size by way of Yggdrasil’s hugely popular Game Engagement Mechanic (GEM), GigaBlox. In addition to these huge symbols, Desperate Dawgs 2 GigaBlox can see players win up to 9,872 x their stake via three features.

Should players land six or more red scatter symbols, they will trigger the Train Robber Bonus, in which a steam train pulls into a station and reveals the contents of its wagons. Each wagon contains either Gold, Silver, or Notes. Dynamite can also be found on these wagons which fill up a number of trails. When a trail is complete the doors of a safe are blown off, awarding up to 200x.

Upon landing six or more yellow scatters, the Gunslinger bonus will begin. This sees gunshots fired at targets which have values assigned to them. Depending on the bullet fired, these values are multiplied by up to 10x.

Finally, the Bad Boy Bonus can be triggered by landing six or more green scatter symbols. This awards Free Spins in which the reels are expanded by one row and 15 extra paylines every time a win occurs. Any new wins revealed are paid and two extra Free Spins are awarded.

Using the Golden Bet facility players can also increase their bet by 50% to more than double their chances of triggering one of the bonuses.

Stuart McCarthy, Head of Product & Programs at Yggdrasil, said: “It’s been fantastic working alongside Reflex Gaming to herald the return of our favourite bad boys, the Desperate Dawgs! We’re confident that this quirky Western release featuring our popular GEM GigaBlox will be another big hit with players, offering a fun theme and high win potential.”

Mat Ingram, CPO at Reflex Gaming, said: “To date, Desperate Dawgs has been our most popular game with Yggdrasil. After breaking records during its opening weekend, we have high hopes for the sequel. Fans of the original Desperate Dawgs will love this, and we hope that it will also appeal to GigaBlox enthusiasts.”

UP YOUR GAME: THE IRN-BRU ENERGY SET-UP THAT WILL TAKE YOU TO THE NEXT...

ThunderSpin captures lightning in a bottle for online casinos