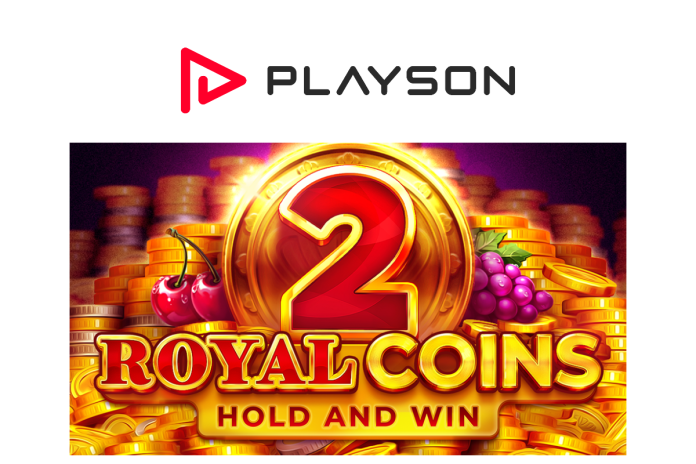 Playson, the fast-growing digital entertainment supplier, has released Royal Coins 2: Hold and Win, a continuation to one of the company’s most well-received slots.

Staying true to the classic fruit-slot format, the latest release features a 3×3 layout with 5 pay lines, while enhanced visuals captivate players as a host of eye-catching symbols and animations are embedded into the title’s mesmerising offering.

During the main game, Wilds can substitute all symbols except for Bonus and Royal Bonus symbols, favouring the players as it gives them a higher chance of getting a winning combination.

The appearance of two Bonus symbols and a Royal Bonus will launch the renowned Bonus Game. The mode kicks off with three re-spins, with every new Bonus symbol resetting the number of re-spins back to three.

The landing of different Jackpot symbols will add additional prizes to Royal Bonus symbols, with the highest-paying Grand Jackpot dishing out a x1000 bet multiplier.

Fans of the original can expect an elevated casino experience as an exclusive Pile of Gold feature adds extra Bonus symbols to the game field, allowing players to trigger additional Bonus Games and create a series of impressive wins.

Nikolay Illiustrov, Playson Head of Games, said: “The original Royal Coins release was so well-received by operators and fans, that we thought it made strategic sense to release a sequel.

“While the new title encompasses a lot of the original’s mechanics, the exciting Pile of Gold feature gives players an amazing and unique opportunity – the ability to trigger a chain of Bonus Games.”

SuperBook® and Jacobs Entertainment, Inc. to Bring Sports Betting to the State of Colorado

InfinityGame Releases Its New Platform, the Lighthouse For Gamers