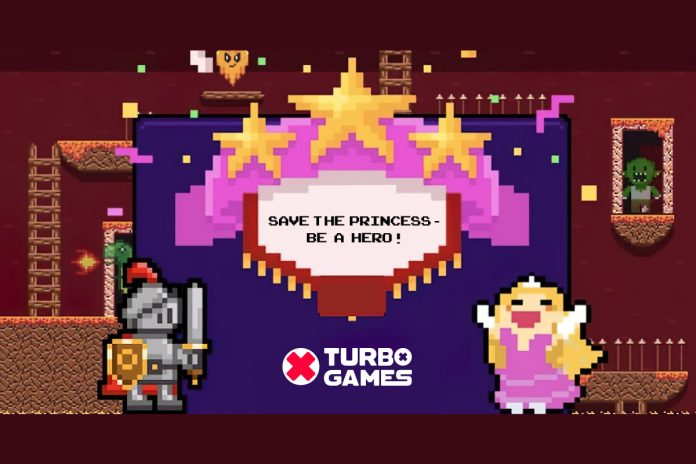 The entire iGaming world is striving to satisfy the most demanding players by offering something triggering and special. It’s a known fact that the best new is the long-forgotten old. The Turbo Games` team was inspired by retro games and has decided to create a new game with some old fashioned but touching design. Everybody played these types of games in their childhood, didn’t they?

A game has 7 stages that a player should go through to succeed and save the princess.This way to the princess is quite dangerous because there are goblins, dragons, vampires and death who can appear behind open doors and end the game. Such protection equipment, like armor, extinguisher and garlic can protect a player in front of a hazard, except death. Of course, the less protection you take at the beginning of the game – the bigger amount of money you will win. So, nothing ventured, nothing gained.

The game environment changes with each stage that creates an image of a long challenging way. But what can stop a real hero when the Princess misses him closed on top of the tower? Such a heroic feat сomes with the corresponding music that warms up the atmosphere.

Slava Zhuk, Advisor at Turbo Games, says: “We are excited about the release of Save the Princess because it differs much from all theprevious games. We have been learning a lot from the time of Turbo Games` launch and now we put these insights into practice, bringing astonishing new experiences to our players all around the globe.”