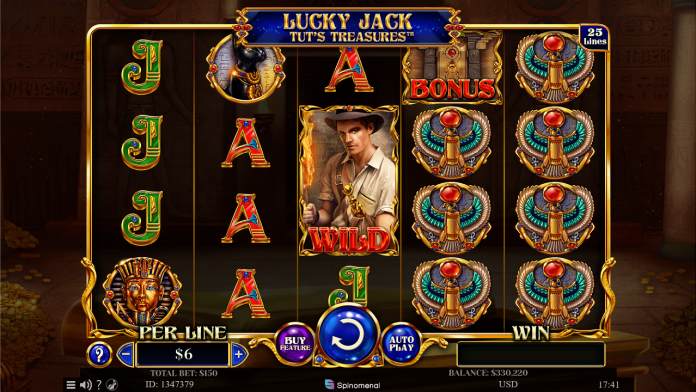 Players are transported into an ancient world where the intrepid explorer, Lucky Jack, must navigate a dangerous adventure to uncover the secret of Tut’s Golden Treasures. This title is bristling with thrilling features which include the Power Spin, Grand Finale and Bonus Game.

Power Spin has the potential to appear during the main game and when doing so will remove particular symbols from the reels for the current session. Wild symbols increase chances of winnings when found on the reels.

When three or more Scatters materialise on screen, the Free Spins feature is launched. All eyes will be on the progress bar that tracks the number of symbols collected and number of spins taken. On the final spin the Grand Finale is triggered at which point the collected symbols will reposition randomly on the slot.

At the conclusion of the feature, the accumulated symbols will transform into matching random symbols to boost the player’s winning chances. Grand Finale will only trigger if at least one collected symbol was added during the Free Spins.

Find three Bonus symbols to launch the game’s glistening Bonus stage. Three spins are granted at the start of the feature, which will only finish once either the spins have expired or every spot is completed. Filling all 20 spots will reward players with the multiplied jackpot prize in addition to the bonus prizes.

Spinomenal’s CTO, Omer Henya, commented: “Lucky Jack – Tut’s Treasures is just the game to announce the launch of our epic Lucky Jack series. This first chapter is jam-packed with fun features that each contribute to an awesome experience on the reels. Riches await those who can safely negotiate the dangers of tracking down Tut’s Golden Treasures.”

Capcom’s Street Fighter™ 6 Charges Into Evo on Its World Tour to...

B.C. Casinos to Welcome Players Back on July 1