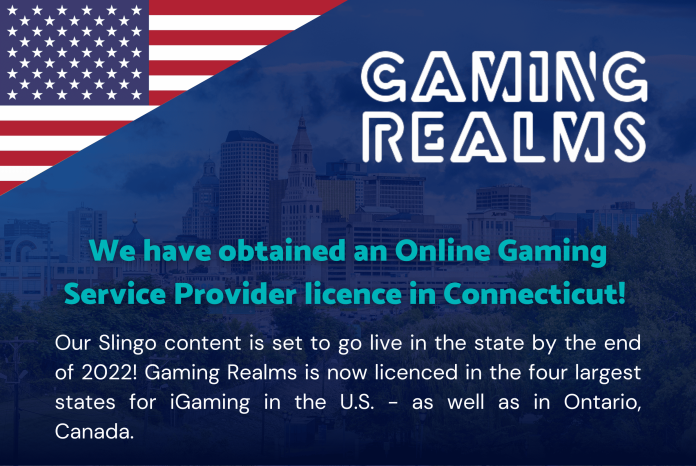 Gaming Realms plc, the developer and licensor of mobile focused gaming content, is pleased to announce that it has been awarded an Online Gaming Service Provider licence by the Connecticut’s Department of Consumer Protection, making it the fourth US State where the Group is licensed.

DraftKings and FanDuel, both of whom have multi state deals and direct integrations with Gaming Realms, are already operating in Connecticut. The Company expects its Slingo content to go live in the state with these operators by the end of 2022, once final certifications are completed.

Michael Buckley, Executive Chairman of Gaming Realms, commented:”We are delighted to have been granted an Online Gaming Service Provider licence in Connecticut, which now sees Gaming Realms licenced in the US’s four largest states for iGaming, as well as in Ontario, Canada.

“The Company’s strategy to sign multi-state deals and direct integration agreements with some of the largest operators in the U.S has also put us in a stronger position for our Slingo content to go live in a shorter time frame and to capitalise on market growth as more states look to regulate iGaming.

“The Company’s expansion outside of North America is progressing as expected, and our Slingo games have recently gone live in Italy with Lottomatica, which is that country’s largest operator.”

Play’n GO Return to Asgard with Odin: Protector of the Realms