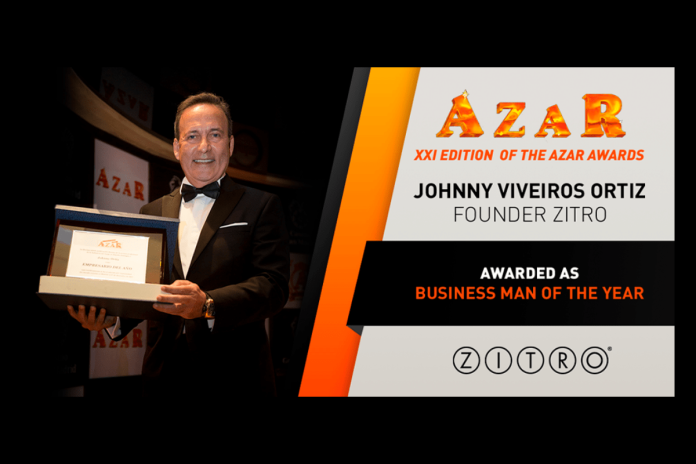 Johnny Viveiros Ortiz, founder of Zitro, has received the “Business Man of the Year” award by the prestigious Azar magazine, dean of the gaming sector in Spain. At a gala held at the Torrelodones Casino in Madrid, the founder of Zitro received this award from Juan Manuel Ortega, which recognizes the most outstanding personalities in the sector and those who have contributed the most to its development.

As stated by the honorary editor of Azar Magazine, Juan Manuel Ortega, “Johnny Ortiz heads the panel of award winners for his unsurpassed and successful dedication to his company in the difficult times of a Pandemic that, bursting many of the corporate seams, has not been able to make a dent in his attitude and determination. Johnny Ortiz has never given up in the face of adversity, in addition to offering the industry his immense creativity in a line of extraordinary products that are hard to beat.

I would like to thank my friends at Azar magazine, and especially its editor Manolo, for this recognition. I have the honor of being at the head of a company, Zitro, which has a team whose work has never stopped, not even in the worst moments of our history. In the months when other companies were busy elsewhere, Zitro focused on investing and creating a new range of products, both cabinets and games, ready to be delivered as soon as the situation allowed. And that moment has arrived, thanks to our effort and courage and, above all, thanks to my team, now our new products are shining all over the world,” said Johnny Viveiros Ortiz, founder of Zitro, after receiving his award.

REALISTIC GAMES BRINGS AN EASTER TREAT TO THE NETWORK WITH HOT CROSS BUNNIES –...

IGT Elevates Play in the Philippines with Games and Systems Deployment at NUSTAR Resort...