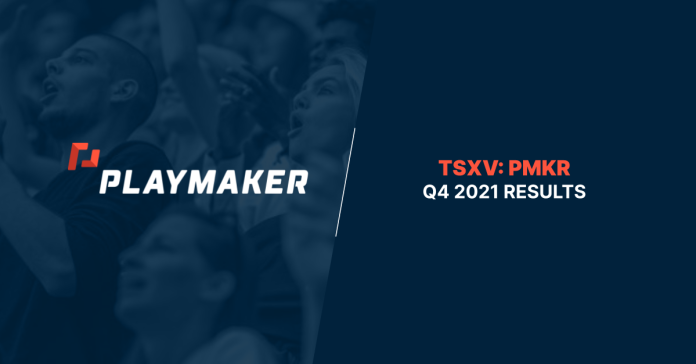 Playmaker Capital Inc. , the digital sports media company that delivers authentic content through its portfolio of sports media and technology brands, is pleased to report its financial results for the three months ended December 31, 2021 (“Q4 2021”) and for the full year of 2021.

“Our pro forma results for Q4 2021 and full year 2021 demonstrate the continued execution of our strategy. We are acquiring great companies and successfully integrating them to leverage the centres of excellence within each business for the benefit of the entire Playmaker ecosystem. Our audience numbers have grown dramatically. We are now generating over 200 million monthly sessions from more than 85 million unique users across Playmaker’s web properties, generating over 50 million monthly YouTube views and 550K monthly podcast streams, and reaching more than 100 million fans across all major social platforms. We have expanded our distribution channels to deliver relevant content to our fans when they want it, how they want it, and where they want it. Our organic growth has been phenomenal, and we have done it while maintaining a focus on profitability with a 119% increase in pro forma adjusted EBITDA year over year,” said Jordan Gnat, Founder and CEO of Playmaker.