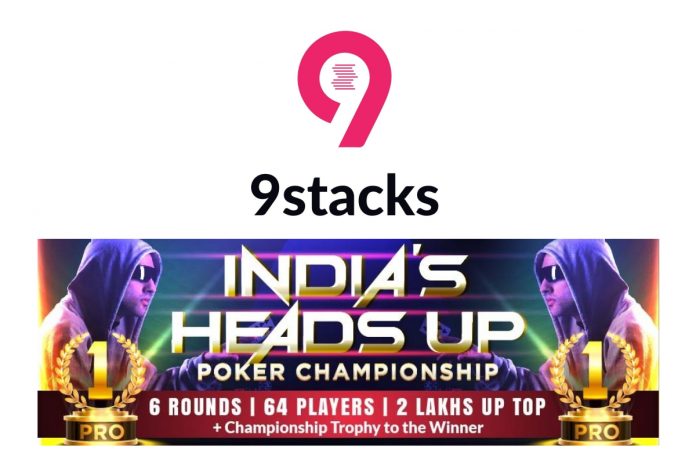 ● This will be a knockout format tournament structure

This November, 9stacks, a leading pioneer of online poker, is all set to host the highly anticipated ‘Heads Up – Poker Championship’. Heads Up play is considered one of the most strategic forms of play in poker because the game is against the player and not just the cards. In such Heads Up matches, aggression becomes one of the most important factors because players are posting blinds every single hand and waiting for great cards is just not an option anymore.

Beginning from 24 November 2020, the Heads Up Championship is designed in the No-Limit Hold’em format. Starting with a buy-in of INR 5500 and no second chances, players are expected to knock out their opponent in every level and keep climbing the ladder to victory. Beginning with 64 players, the game advances by reducing the number of players by half. At the end, the last two players have to compete against each other for the final Trophy, cash prize and the title. The top four players get rewarded.

With two weeks of thrilling action, the winner bags the title of Heads Up – Poker Championship of India, takes home 200K prize money along with the winner’s trophy!

Sudhir Kamath, 9stacks co-founder says “At 9stacks, we believe in constantly looking for new and exciting avenues to promote poker. One extremely competitive format of poker is HEADS UP format where only two players at a time go head to head against each other – almost like a boxing match! For the first time, we’ve been able to conceptualize a tournament in this format which will identify ONE winner out of a select field of 64 players – someone truly deserving to be called a CHAMPION. Looking forward to some intense matches!”