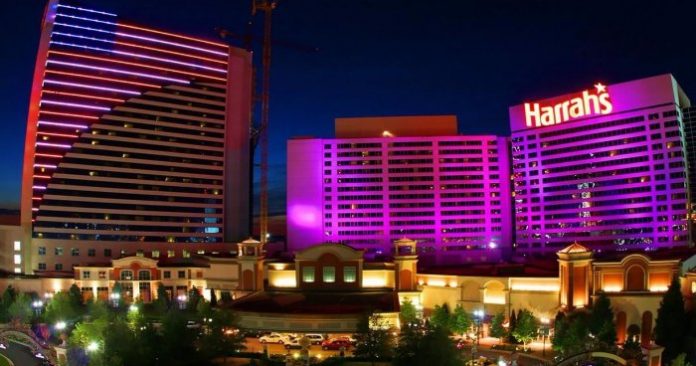 Harrah’s Resort Atlantic City celebrated its 40th anniversary this weekend, commemorating four decades of achievements and milestones. Beloved by generations across the tri-state area, the premier bayside resort destination has evolved to meet the ever-changing demand for new experiences and to reach new audiences. Over the years, Harrah’s Resort has hosted hundreds of signature events, welcoming guests, countless celebrities, and many notable guests through the years, making it a must-see hotel and casino in Atlantic City. What’s more, the popular destination offers award-winning restaurants with an array of accommodation options, including the newly renovated Laguna and Coastal towers, showcasing stunning Bay views.

On the heels of the resort’s latest hotel renovation, the newly-formed Caesars Entertainment recently announced its commitment to $400 million in total capital investments and improvements into its Atlantic City resorts – Caesars, Tropicana, and Harrah’s Resort – over the next three years.

Last month, Harrah’s Resort received notable recognition by being voted one of the country’s Top 10 Casinos Outside Las Vegas by USA Today’s 10 Best Readers Poll. Additionally, Caesars Rewards received top accolades as the #1 Best Players Club in the nation for the third consecutive year, strengthened by the property having the loosest slots in Atlantic City*, offering the highest total slot payback percentage in the seaside gaming town for the seventh year straight. (*Based on NJ DGE monthly revenue statistics & Strictly Slots magazine).

“With three premier resorts in the market, and as the largest employer in Atlantic County, Atlantic City is critical to the success of Caesars Entertainment,” said Steve Callender, Regional President for Caesars Entertainment. “Under the newly-formed Caesars Entertainment, we have over 60 million Caesars Rewards customers, many of whom live within driving distance of our properties. Having spent my entire career in the City, I have a special appreciation of this landmark 40th anniversary for Harrah’s Resort, the gaming industry and Atlantic City. 2020 has presented us with challenges unlike anything we have endured before over the past four decades. I am extremely grateful and proud of the teams at Harrah’s, Tropicana and Caesars, who continue to deliver first-class service to our guests, while putting health and safety at the forefront of the experience,” he added.

“For almost half a century now, Harrah’s Resort has been committed to Atlantic City and has helped lead the way in positioning the city as a leading gaming & entertainment destination on the East Coast,” explained Ron Baumann, Senior Vice President & General Manager for Caesars & Harrah’s Resort. “But most importantly, however, is our dedication to helping make the community we serve a great place to both work and play. Through all the ebbs and flows this market has seen, including the unprecedented times we are living through right now, Harrah’s has continued to thrive over the last 40 years, and we attribute much of our success to our day-one employees who deliver top-notch service to our guests each day, and our loyal customers. While the celebration may look a bit different this year, we are unbelievably proud of our team members and thank our customers for their loyalty.”

For the past 40 years, Harrah’s has hit many notable milestones; however, the destination is most proud to be home to 40 day one team members who have been with the company from the first day the resort opened its doors and are actively working right now. For more than four decades, these legacy team members have delivered superior customer service and a welcoming smile that Harrah’s loyal customers have come to know and love.

Known for delivering exceptional entertainment and dining, Harrah’s Resort Atlantic City continues to offer guests curated experiences through an impressive roster of fine dining establishments. A notable restaurant is Gordon Ramsay Steak, celebrating two years as one of Atlantic City’s only two restaurants by a Michelin Star chef, and his only restaurants in the tri-state region. The celebrated television personality and 7-Michelin star chef opened his first steakhouse concept at Harrah’s in 2018.

“For me, Gordon Ramsay Steak at Harrah’s Resort has been one of the most exciting steak houses I’ve ever opened. Thank you to Caesars Entertainment for being a great partner, the team at Harrah’s helping bring this vision to life, and to our customers for their loyalty. I know this year has been difficult, but I can’t wait to get back to Harrah’s to help celebrate their 40th birthday.”- Gordon Ramsay

When Harrah’s doors reopened in July and outside dining was a premier amenity, the team found a creative way to give Gordon Ramsay Steak a “breath of fresh air” with a pop-up experience on the rooftop of the resort’s famed Pool, offering al fresco dining “Under The Stars.”

As of November 2020, Gordon Ramsay Steak has crossed off some exceptional milestones, including:

A 40-Year Commitment To The Community

Since opening its doors on November 22, 1980, Harrah’s Resort Atlantic City has been committed to building a strong South Jersey community. In 2019, the resort supported hundreds of community organizations while empowering team members to do the same. Additionally, Harrah’s strives to do their part to protect the environment through its industry-leading Code Green initiative – part of the company’s People, Planet, Play platform – that translates to an eco-friendly guestroom experience and LEED-certified $125 million Waterfront Conference Center.

When Atlantic City casinos closed their doors in April, Caesars Entertainment Atlantic City Resorts launched a large-scale relief effort to support the community and donated over 95% of its perishable food to local organizations. Caesars Entertainment and its employee volunteers delivered over 40,000 pounds of food, including fresh dairy, produce, canned goods, and lunch meat to those in need at The Community Food Bank of Southern NJ, The Salvation Army, and The Atlantic City Rescue Mission Food. To ensure nothing was wasted, recently perished items were donated to The Funny Farm Animal Rescue in Mays Landing, NJ.

Recently, the company has focused on helping to fight food insecurity in the area, where the pandemic has impacted many residents throughout Atlantic County, starting with its recent $5,527 donation to The Community Food Bank of N.J. (Egg Harbor Township), where a portion of ticket sales from Harrah’s Bayside Rock Live outdoor concert series were donated.

Further extending their commitment to the community, Harrah’s Resort has delivered premade sandwiches to over 12 organizations in the area each week, led by the culinary team at Harrah’s. The sandwiches will be used for lunches to support the new after school program and teen center at the Boys & Girls Club and assist non-profits in area fighting food insecurity and homelessness in Atlantic City. Recently, more than 180 sandwiches were donated to Covenant House, a place that provides youth homeless shelters in the city, and 150 sandwiches were recently delivered to Turning Point, an organization dedicated to combating homelessness in the city, and will continue on a weekly basis as needed. By the end of the year, nearly 20,000 items will be distributed to organizations in Atlantic City.

Caesars Entertainment Atlantic City destinations, including Harrah’s Resort, are pacing to commemorate the distribution of its one millionth mask this weekend – having collectively distributed a million masks to team members and customers since reopening at Harrah’s, Caesars, and Tropicana. This milestone illustrates the company’s commitment to keeping their employees and guests safe.

As a thank you to their guests who have made Harrah’s Resort Atlantic City an iconic destination, the resort is holding a promotion every Saturday this month where the property will give away 40,000 rewards credits every 40 minutes from 12 p.m. – 8 p.m.

XtraWays™ sees players collect counters that increase the size of the reels on the...

Start of trading in LeoVegas shares on US market OTCQX