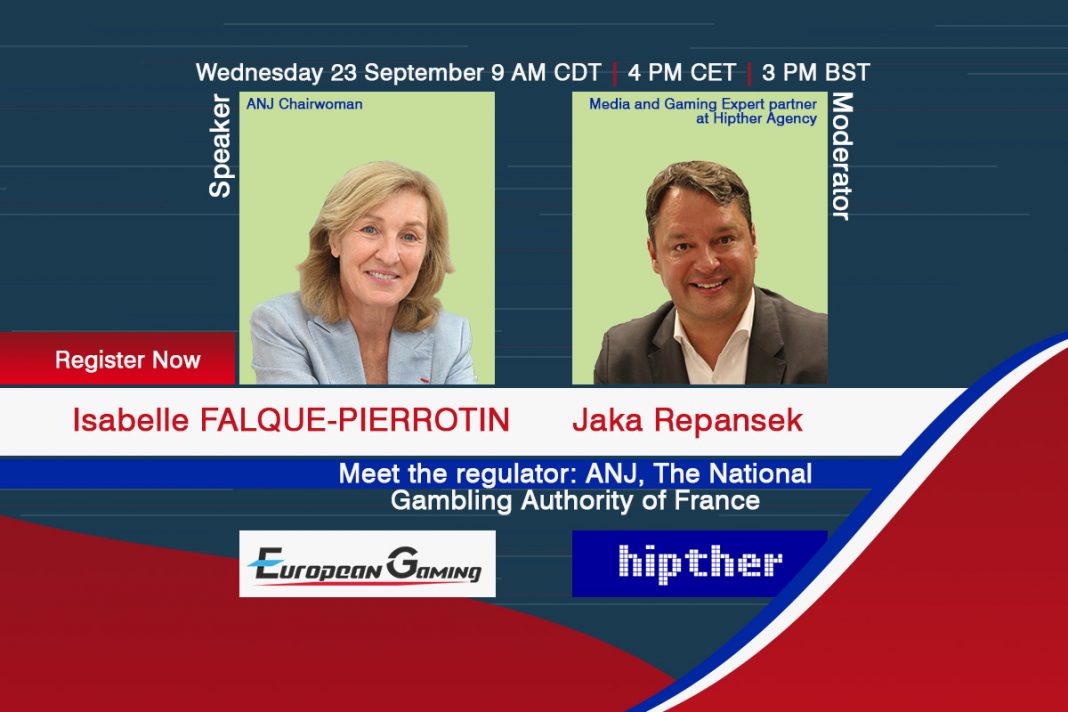 In 2010, the legislator gave the Regulatory Authority for Online Games (ARJEL) the status of an independent administrative authority. This status was necessary to prevent a double conflict of interest: on the one hand, the State is a shareholder of one of the operators, La Française des Jeux, and on the other, it must arbitrate between tax and public health issues.

With Article 137 of the Pacte Act on the privatization of La Française des Jeux and the Order of October 2, 2019, reforming the gambling regulation, the legislator broadened the scope of intervention of the new Gambling Authority (ANJ) by giving it the status of an independent administrative authority.

The ANJ reports to Parliament: it presents an annual activity report and its President may be heard by the competent committee of each of the two assemblies.

On 23 September (Wednesday) at 10 AM EDT | 4 PM CEST | 3 PM BST, Isabelle FALQUE-PIERROTIN (ANJ Chairwoman) will join Jaka Repanšek (Media and Gaming Expert, Partner at Hipther Agency) for an exciting talk about ANJ and its mission.

Isabelle FALQUE-PIERROTIN is a graduate of the Hautes Etudes Commerciales business school (HEC), a former student of the National School of Administration (“Denis Diderot” promotion) and the Multimedia Institute in 1990. Auditor then “Maître des requêtes” at the French Council of State, she has been a State Councillor since 2001.

She joined the Bull Group from 1991 to 1993, and then was deputy director of the Minister of Culture’s office from 1993 to 1995. She was appointed expert to the OECD in 1996-97 and became Chairwoman of the Advisory Board and General Delegate of the Internet Rights Forum from 2001 to December 2010.

From January to April 2019, she was appointed responsible for the French “Grand Débat”. Then, she was charged by the Prime Minister with a prefiguration mission of the National Gambling Authority (ANJ).

Host/Moderator – Jaka Repanšek (Media and Gaming Expert, Partner at Hipther Agency) has worked for various TIME (Telecom, Internet, Media, Entertainment) companies since 1996. He is recognized as one of the leading experts on gaming, media, and digital law in Slovenia. Jaka graduated from the Faculty of Law at the University of Ljubljana, Slovenia, and gained his graduate degree from Cambridge University in England and Faculty of Law in Ljubljana (Diploma in European Community Law) and completed two-year MBA graduate studies at the University of Kansas in the USA. Jaka is an active member of IMGL (Slovenia) and a member of several other domestic and international organizations and is active also as a lecturer in various seminars and conferences.

The session is free to join and will be highly interactive with a special Q&A session. Register to join and received the notifications about when we go live!

You will receive a reminder with the webinar link 24 hours and 1 hour before the webinar.

We look forward to welcoming you to our webinar!

This webinar is powered by EuropeanGaming.eu

The reels are haunted in Ghostly Towers™!