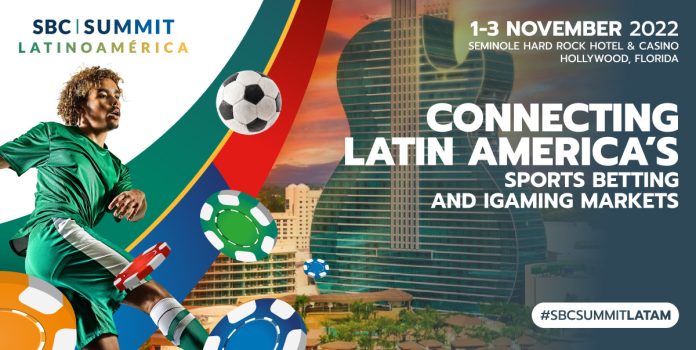 As one of the world’s most dynamic regions for sports betting, LatAm offers a wealth of opportunity for suppliers in 2022. We sat down with Chris Nikolopoulos, CCO at BETBY, Camilo Millon, Head of Sales, LatAm and Spain at Kiron Interactive and Hugo Llanos, Regional Director Americas at Altenar to get the latest on how the continent’s betting markets are being shaped.

Taking a broad view, what’s your take on the current online sports betting environment across the continent? What do you predict we’ll see over the next 12 months in terms of digital evolution?

(CN) Latin America is home to approximately 10% of the world’s population, and it is no secret that plenty of those living there absolutely love sport. The sports betting industry in the region has undergone a lot of transformation during the past 20 years, with a key change being that it has shifted from land based to online.

This is a phenomenon that we expect to continue for the foreseeable future. What is also important to mention is that the region, in particularly Brazil, represents a big part of the Esports community and I am confident that there will be more and more Esports-focused betting websites appearing in the coming months and years.

(CM) Latin America is a somewhat conservative market and has, thus far, seen the focus resting largely on retail, with what online activity there is being quite limited in comparison to other regulated markets globally. Perhaps the main driver for this conservatism is in the average LatAm bettor’s aversion to change – it’s not something they’re keen on. This ties in with the importance levied on reputation when building solid and trustworthy relationships in the market. Add the relatively high cost of mobile data and you’ve got an organic environment for retail to thrive at the cost of its online cousin, which I don’t see gaining much traction in the next 12 months.

Virtual sport on the other hand, as a general vertical, has seen its popularity gain ground and is in a very healthy state. This is particularly so across sports betting when major live tournaments are underway, even as far as during the qualification stages and as such, football remains the dominant virtual sport across LatAm, as you might expect.

(HL) It has certainly been an intriguing period for the online sports betting industry. Back in March 2020, the sporting world froze. Many things have changed since then; it required the entire industry to speed up with everything related to safety and health.

One of the key areas of change is the progression towards an online-mandatory approach for business, driving an increase in the volume of land-based companies operating online. It is likely M&A activity will occur, with a key differentiating factor between competitors hinging on who understands the local business better to provide a superior product for the customers.

In terms of regulation within the LatAm market, Columbia could be an influential component with other countries following suit. These changes can happen quickly, it is therefore vital to be flexible to keep up with the industry growth and requirements.

Looking at the key markets of Argentina, Colombia and Mexico – how much do sports betting trends differ across the continent? What sports and verticals are proving most popular aside from football?

(HL) In the LATAM market it is evident that football (soccer) is the favoured choice for bettors, the secondary pick varies across the market depending on the country. For example, Mexico is very US-Sports oriented, the NBA, MLB, and NFL are also extremely popular. In other regions tennis is a preferred choice amongst bettors – so it’s all about catering to regional preferences.

Of course, It is clear for all to see that LatAm users are very passionate about sports, Colombia for instance is big in terms of betting multiples, including favourites. Furthermore, esports, virtual sports and other verticals such as casino alongside the industry are continuously growing – and it’s certainly an area to watch.

(CN) Football is king in all of the mentioned markets above, and there’s no doubt about that. Mexico offers more diversity to Colombia and Argentina, in the sense that it is closer to American sports, with Baseball and American Football being quite popular in the region. In a comparison between Colombia and Argentina, I would say that Argentina is much more diverse in terms of what sports are popular and what people are willing to bet on, such as horse racing.

(CM) The further north you go in these countries, the more ‘Americanised’ the popular games tend to be, with basketball being popular in Mexico for example. At the opposite end in the south, horse racing, greyhound racing and table tennis remain firm favourites.

Each country in LatAm is unique in terms of its betting patterns and trends. The one similarity across regions however remains the importance that needs to be placed in educating audiences and creating awareness of any new product, sport or vertical that is introduced. Trust in a product is key. Locally we have been putting hard yards into the marketing of virtual sports, helping operators and players understand how they work, and making this process as transparent as possible. This effort has been paying dividends too, with acceptance gaining momentum as audiences start to understand and build trust.

How much interest are we seeing in the big four US sports and European football leagues?

(CN) Leading European Football leagues have started gaining significant traction in LatAm territories during the last years, as they become truly global leagues. The gap between the major leagues and local, national leagues, in terms of volume, is still vast. With regards to US sports – we must recognise that it depends on the subregion. Places in Central America, such as Mexico, tend to show bigger interest in US sports, compared to markets like Brazil for instance.

(CM) La Liga is very popular due to the common language shared and the overall quality of European leagues and formats which amasses large followings, particularly the EPL, Serie A and the international Euro competitions. As previously mentioned, American Football, Basketball and Baseball increase in popularity the further north you travel and there’s a lot of love for tennis too!

(HL) There is a significant appeal the main European football leagues generate within the LatAm market, coupled with the fact that football is the main source of entertainment for bettors, and therefore a key component in generating turnover. More recently this is noticeable surrounding the big four US sports (NFL, NBA, NHL and MLB) which are growing in popularity across the entire LatAm market. While local leagues are important for each specific country, the main European football leagues and four main US sports are common for all.

Looking to Esports, which is arguably one of LatAm’s fastest growing verticals, what’s your view on its surge in popularity? Do the demographics differ to those who bet on Esports?

(CN) For the past 10 years we have all been discussing how Esports as a vertical is increasing in betting volume and will be the next big thing, and while this is undoubtedly true, it hasn’t yet reached the amounts we were expecting. However, with Generation Z becoming more and more active as bettors than any previous generation, we can really expect a huge increase on the Esports vertical. It is important to note that Gen Z is the first generation growing with a tablet and mobile in their hands. This nurtures a digital identity from an early age and a much stronger bond with anything associated with electronics – including Esports. We would argue that Esports has a younger audience compared to traditional sports like Football, Cricket or Basketball, and in the coming years will represent a bigger part of the pie.

(CM) It’s very much a generational divide in terms of popularity – esports appeal more to the younger players/bettors and this popularity grows in relativity to the growth we see in esports as a whole. There’s still huge potential for it to get even bigger, as new generations come of age and establish themselves as the clients of the future. For this reason, suppliers and operators must pay close attention to what’s on the horizon and stay ahead of the game. Virtual sports do appeal to a more diverse age group as they appeal to both younger bettors, who are accustomed to animated products, as well as traditional sports and racing bettors in the older age groups.

(HL) Esports has certified its position as one the most in demand verticals on the market, growth spiked during the pandemic – especially efootball (FIFA). There is still a great deal of room for expansion in this sector, Madden’s popularity could also unlock a whole new market within esports – particularly for northern markets on the continent close to the US. It is clear there is a lot of development yet to take place which will allow bookies and bettors the opportunity to better understand certain aspects such as risk management, but I believe this is a very strong growth space.

In terms of demographics, it’s not necessarily the same users for virtuals. Virtuals are RNG games, while esports are real competitions between real people. Esports users are more used to purchasing things online, more technology-savvy and more loyal towards their games, so they could be a very nice addition to any customer database, and certainly a key alternative revenue stream.

Last but not least, the big prediction that all our readers will want to know about – what odds would you give on Brazil becoming a regulated market by this time next year?

(HL) There has recently been a big push towards obtaining regulation in Brazil, there is a good chance this will happen within the next year. It would be great for the LatAm market and the betting industry as a whole, although we have certainly been waiting a while already! How long that continues remains to be seen, but we are certainly watching with excitement.

(CN) I would like to avoid speculating about this issue myself so I will avoid giving specific odds. What I can say, is that Brazil has taken steps towards a regulated framework over the past few years, and it is only a matter of time until this prevails. I am very interested to see how this will transform the market, so naturally, BETBY we will be keeping a very close eye on the market and its development.

(CM) Brazil becoming regulated in 2022 is not likely due to the sheer amount of bureaucratic red tape. However, change is most definitely afoot and the long-awaited first draft of regulations could be with us as we progress into 2023 but I’d be surprised if came any earlier.

Markets in Latin America take a long time to get their houses in order, some cases taking as long as 10 years. While momentum is gathering pace and we are nearing a resolution, progress will still be cumbersome. It’s a huge transition but one we’re all looking forward to it.