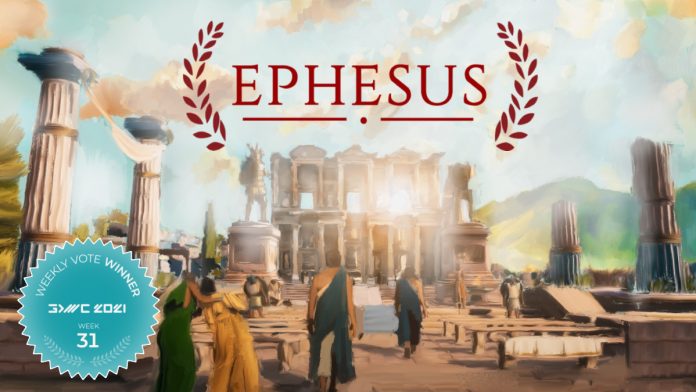 Ephesus, developed by a five-member team from Turkey, The Pack Studios, has won the 31st Fan Favorite weekly vote at the Game Development World Championship 2021. Ephesus currently available on Steam in Early Access.

“Ephesus is an exploration and survival game adorned with a unique story. Write your own destiny through the West Aegean Coast of the glorious Roman Empire. While you’re on the path, don’t forget to stay alive!”

2nd Place: Apopia: Prologue by Quillo Games. “Apopia is a cute comedic adventure with dark mysteries. You play as Mai, a young girl who needs to find her way home in a colorful fantasy world without knowing who she is.“

3rd Place: Gravity Runner by Two Dog Games from Australia. “Gravity Runner is a physics based 3D Platformer/Runner with a killer synthwave soundtrack.”

GDWC team sends congratulations to the winner and thanks to all Nominees.

GDWC 2021 Fan Favorite Vote 32 Nominees are:
– As one against our end by As one against our end team (France)
– Cat Fire 2 by Day137 (Vietnam)
– Godless by Danil Kalyupa (Kazakhstan)
– Keyword: A Spider’s Thread by City From Naught Inc. (Canada)
– Project Haven by Code Three Fifty One (Portugal)
– Punkgrad by JOLY APE (Russia)
– STHELL by Claudio Catalano, Simone Campione (Italy)
– The Frosts: First Ones by Ivan Sukhanov (Russia)
– Zooconomy by Curious Foxes (Russia)

Nacon and KT Racing Announce “TT Ride on the Edge 2020”