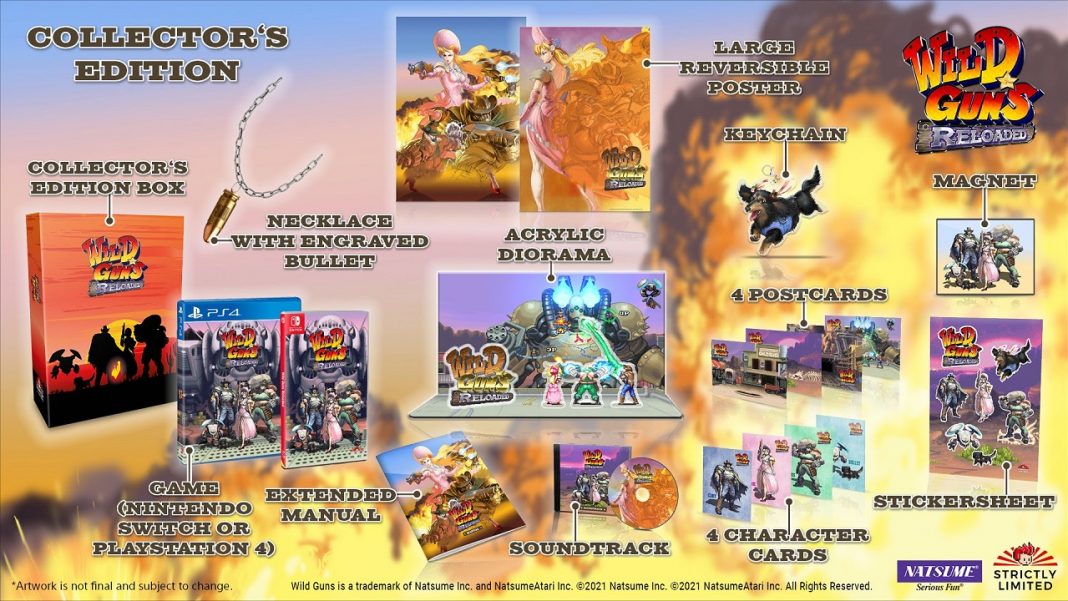 Fans of the wild west shoot ’em up can get Wild Guns Reloaded as boxed Limited Edition and Collector’s Editions for Nintendo Switch and PlayStation 4. Plus, there will be something special for the retro game enthusiasts out there – the popular, acclaimed ’90s classic Wild Guns will be coming back in limited quantities for SNES!

Wild Guns is a classic fast-paced arcade-style shooter, mixing classic Wild West with futuristic yet retro steampunk. Play as Clint or Annie and jump, dive, and roll to get out of the way of the barrage of bullets enemies let fly. Grab a friend and face your enemies together in 2-player co-op! Gather machine guns, grenade launchers, shotguns and bombs to defeat the various enemies and bosses in different stages, all of which are coming with a visually outstanding and detailed design.

As the worthy remastered version of the classic game, Wild Guns Reloaded brings you two additional characters for some thrilling four player action. Besides Annie and Clint, you now also join the fight against the futuristic mech-opponents as Doris and Bullet the dog!

With all the new content, however, Wild Guns Reloaded is making sure that players still get the original Wild Guns experience as it stays true to the roots of the original.

The well-known gaming site Nintendo Life had high praise for the game, saying:

“Wild Guns Reloaded sets the new benchmark on how to bring back old Super Nintendo titles to the current generation of gamers. It not only manages to remain faithful to everything that made up the original such a stellar effort, but actually offers some worthwhile new content. Solid, memorable and fun arcade shooting action that will keep you coming back for more, even if only to see Bullet hovering about while grappled by his lethal drone”. 9/10 Excellent.

Get yourself an awesome limited Edition for pre-order at the Strictly Limited Games Shop.