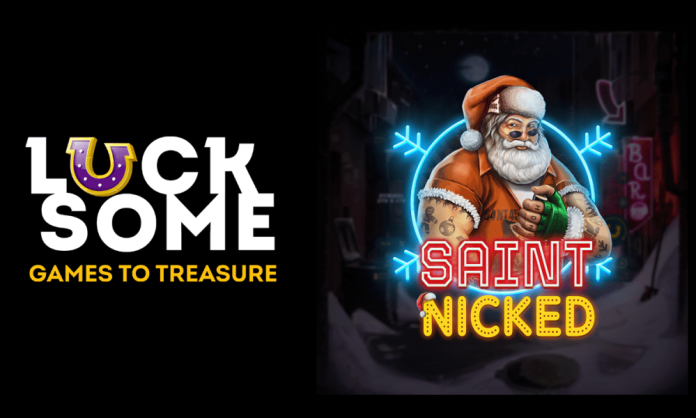 Players are invited on a wild night out with Santa and Rudolph in Saint Nicked™, the latest slot release from Lucksome. The festive legends decide to go a bar rather than carry out their jolly duties this year.  Can they avoid a misdemeanour while shirking their Christmas responsibilities?

This 5×3 slot comes with 243 ways to win in the base game and can be expanded to a 5×5 grid in Free Games, with up to 3125 ways. The game has myriad features which will appeal to a wide range of slots players, including expanding reels, retriggers, multipliers and sub-symbol mechanics.

Santastic Multipliers are triggered in both the base and Free Games rounds. Landing Santa and Rudolph in a win applies a random multiplier to all wins on that spin, from 2-5x in the base game and 2-25x in Free Games.

Landing frothy beer mug sub-symbols during the base game adds to the Bar Meter, which in turn triggers the Advent Calendar feature. The numbers on the sub-symbols denote how much the Bar Meter increases and continue to add until spin doesn’t land a sub-symbol. Players open each door on the advent calendar, their progress saved across sessions, with bigger and better prizes on offer as they progress. Reaching the 25th Door, unlocks an additional Free Games trigger permanently. Watch out for the Happy Hour feature, when the number of sub-symbols is dramatically increased on a spin to trigger boost a player’s bar meter.

3, 4 or 5 scatter symbols, in the form of Cop Cars, trigger 5, 10 or 20 free spins respectively. The Free Game reels start at 5×3 with two additional rows able to be unlocked when the Key symbol lands on that reel. This also awards another free spin, as does the Soap on a Rope symbol. Unlock all locked spaces to increase the board to a full 5×5 with 3125 ways to win!

Johan John at Lucksome, said: “Saint Nicked has been in development for some time and is one of our most exciting releases of 2022. The team have worked tirelessly to build in a whole host of amazing features and mechanics and it’s a game we are all really proud of.

Wildz Partners With Twitch Streamers for a Competition