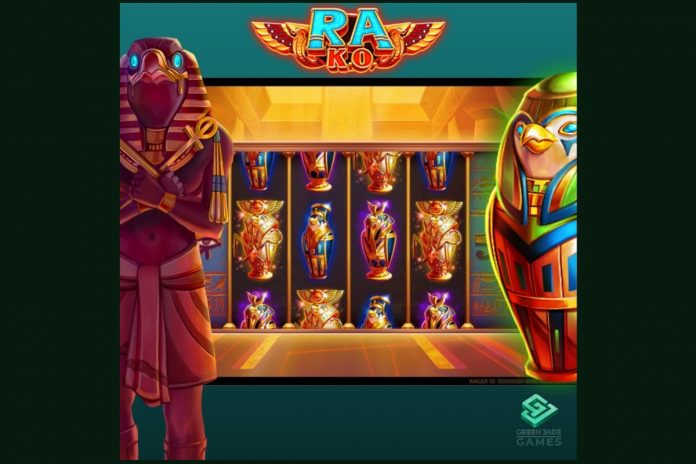 Green Jade Games pushes the envelope again with Automation of KO engine in this Heliopolis smash.

The game uses a 6×4 reel matrix with 50 ways to win with every spin. Players are helped in their quest to uncover ancient treasure with three bonus features.

The first is an Auto Knockout feature that automatically knocks out symbols on the reels in order to line up Loot Box wins during the base game.

When a symbol is knocked out, it disappears and the symbols above it in the same reel cascade down to fill the empty space. Loot Box wins only occur when three of more boxes align horizontally.

The game will automatically achieve the best possible Loot Box win with the Knock Out charges currently available to the player – chargers are earned at a rate of one charge per 11 spins.

Winning combinations that include three to six Look Boxes will then reward players with the same number of prizes on Ra’s Bonus Reels which are packed with special Bonus symbols.

Each symbol contains a range of possible prizes from a 2x multiplier all the way up to a 2,000x multiplier allowing players to collect a trove of their own treasure.

Ra also helps players discover potentially big wins and will randomly add between four and 16 Magic Wild symbols to the reels after a spin, replacing existing symbols and increasing the chances of a win.

Mark Taffler, Chief Commercial Officer at Green Jade Games, said: Our main focus is to improve our games all the time.  The space is crowded, and any providers ‘usp’ risks being outdated quickly due to the cadence of content.  We are constantly listening to feedback from operators, players, and our own data, and in RA KO we decided to upgrade the KO feature automating it, allowing a more seamless player experience. The Skill Balance Pot technology featured in this game, and our Arcade games is a real point of difference, it allows us to be much more daring with our releases.  Keep an eye out for Cash Smash in the summer…

The guests of Casino Malta continue enjoying the EGT games