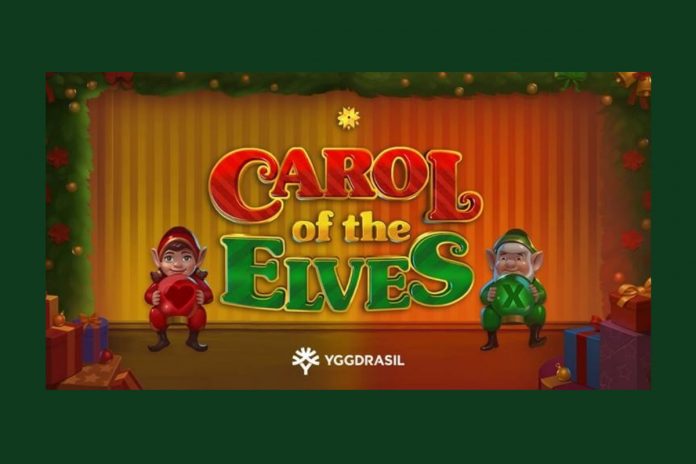 Yggdrasil, the leading global publisher of online gambling content, has released its fun-filled festive hit, Carol of the Elves.

The 5×5, 3,125 payline slot invites players to the festive world of the Elves as they prepare for their busiest time of the year.

With 12 spots on the reel initially frozen over, each winning symbol releases magic stars which have the power to open new spaces for symbols to fall, while also triggering a respin. The grid returns to its partially frozen state after no more wins are achieved in baseplay or respins.

Once the grid is completely unfrozen, the Elves either side of the reels come into play, with magic stars charging either the red elf for extra lives during the respins, or the green elf, who adds to the multiplier for the round. Each elf requires five magic stars to reach the next level.

With the respins continuing and players building up their bank of lives through the red elf, any spin can be the start of a lucrative win thanks to the generosity of the game’s Christmas characters.

Carol of the Elves is the latest addition to Yggdrasil’s core slot portfolio following the recent releases of Syncronite Splitz and Hades Gigablox. It joins a growing offering of proprietary content and the acclaimed YG Masters games portfolio offerings.

Jonas Strandman, Senior Games Strategist at Yggdrasil, said: “The festive season is upon us and Carol of the Elves sees Santa’s loyal helpers take players to the next level in their play sessions through the gifts of multipliers and extra lives.

“We continue to strive to create highly engaging and immersive content and we’re delighted with Carol of the Elves. We’ll be ho-ho-hoping our players love it too as they get ready for one of the most exciting times of the year.”

Gratogana bets on MGA Games content for its expansion in Spain

4ELEMENTS ESPORTS IS MOVING FWRD THE BEGINNING OF A NEW ERA