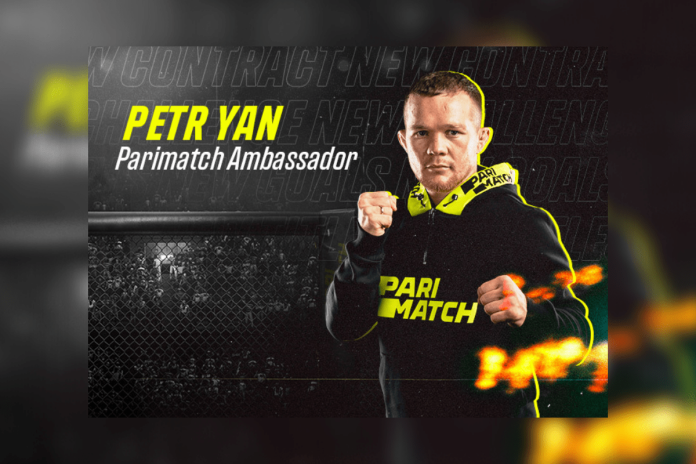 Global betting brand Parimatch and Petr Yan, UFC’s Interim Bantamweight Champion, have announced the extension of their partnership as part of their ambassador contract.

According to the extended contract, Petr Yan will take part in the company’s key marketing activities, including promo video collaborations, giveaways, press conferences, master classes, and other activities.

“I am used to being among the best and taking what’s mine. That is why I am surrounding myself with the best partners. We have gone a long way together with Parimatch, and it is only going to get more interesting from now on,” stated Petr Yan.

Petr Yan started his cooperation with Parimatch in 2019, joining a pool of ambassadors that also included world sports stars Conor McGregor and Mike Tyson, and has since become one of the company’s most important and recognizable partners. In over two years, the partners featured several ambitious projects. Petr took part in the large-scale I Am Parimatch ad campaign, which also featured rapper Basta, UFC fighter Arman Tsarukyan, and other brand ambassadors. After conquering the champion belt, the fighter took part in the Parimatch special occasion press conference and appeared on the print of exclusive limited-edition T-shirts from the brand.

Ahead of him is a long-awaited rematch against Aljamein Sterling, in which No Mercy is planning to claim the belt. The fight between Yan and Sterling is scheduled for April 9, 2022, as part of the UFC 272 tournament.

The extension of the contract with Petr Yan has strengthened the global pool of Parimatch partnerships. At the time, it features a wide range of teams and sportsmen from all over the world, including eSports teams and personalities (HellRaisers, Team Spirit, etc.) and world’s top football clubs (Juventus F.C., Chelsea F.C., Everton F.C., etc.).

Classic Retro Shooter Returns , A no messin shooter on consoles.