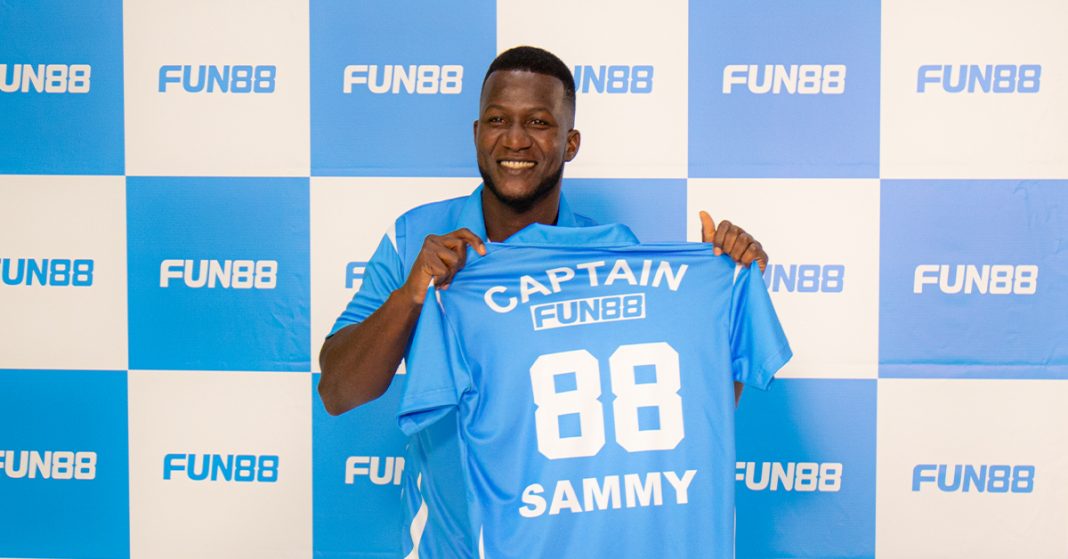 Leading Asian operator Fun88 has announced that West Indian cricket legend Daren Sammy is to become its new brand ambassador, having signed a multi-year deal with the brand.

Fun88, one of the most renowned and respected online sportsbooks and casinos in Asia, is breaking new boundaries by signing the 37-year-old as its first flagship cricket spokesman in an opening partnership which promises to organically build on Fun88’s ongoing strategic alliance as official partner of the popular Caribbean Premier League (CPL) for T20 cricket.

Sammy and Fun88’s combined goal is to enhance fan engagement around the game’s most thrilling format by creating fresh content and learning opportunities for diverse audiences. Regarded as one of the best bowlers and all-rounders of his generation across all formats, Sammy became the first player from his local island of St Lucia to play international cricket on his 2004 debut. He went on to captain the West Indies to two ICC World Twenty20 tournament victories in 2012 and 2016, underlining his long-serving commitment to the sport and his propensity for inspirational leadership.

This breakthrough international collaboration is now set to drive deeper engagement amongst cricket enthusiasts across the globe. Sammy now joins the likes of Robbie Fowler, Steve Nash and the much-missed Kobe Bryant in Fun88’s historic stable of superstars, each putting their shoulders to the wheel in building the brand’s global sports exposure.

A Fun88 spokesperson welcomed the brand’s new cricket ambassador: “Simply put, Daren is a leader and an inspiration to all. His sustained success and dedicated contribution to Caribbean cricket is truly remarkable. Daren’s fan following in India is also huge, bolstered in more recent history by his performances for the Sunrisers Hyderabad and the Royal Challengers Bangalore in the Indian Premier League.

“With these intrinsic ties in mind, our partnership with Daren is synonymous with our wider vision of making Fun88 the go-to destination for sports content in India. We are extremely excited about this association and hope that we can engage Daren’s loyal following with some unique and exciting new content to form a key part of our localised acquisition and retention strategy, taking the Fun88 brand to even greater heights.”

Daren Sammy commented: “My relationship with the number 88, which has been my jersey number too, spans more than two decades. So, with Fun88, I now see a natural synergy to make it the go-to destination for sports enthusiasts in India. Having followed Fun88 for a while, I have seen how the platform has evolved over the years. It has always celebrated sports and cricket, bringing fans together since inception. I’m thrilled to be collaborating on this partnership with the team at Fun88 and very grateful for being given the opportunity to act as its ambassador and public face.”

While Fun88 continues to develop its online offerings for sports fans around the world, this latest landmark highlights its commitment to international representation and fostering a cricket-friendly atmosphere within a responsible gaming culture.

Fun88 provides one of the widest offerings of markets and odds for the sports bettor. With customer satisfaction and entertainment at its heart, it provides an innovative and holistic experience via the latest technology and games, alongside impeccable and personalised customer service.

WHO PUSHES YOUR BUTTONS — WHAT WOULD POPULAR GAMING CHARACTERS’ DATING PROFILES LOOK LIKE?