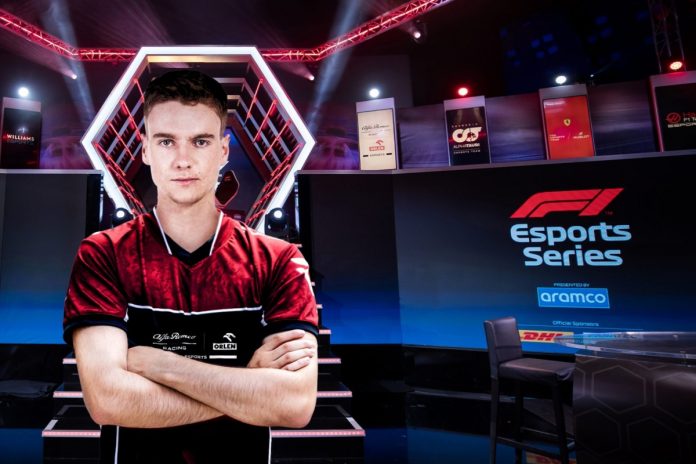 The penultimate round of this year’s F1 Esports Series presented by Aramco saw a trio of thrilling races at some of motorsport’s most iconic circuits as drivers fought it out at Silverstone, Spa and Monza in Event 3. Alfa Romeo’s Jarno Opmeer and Red Bull lead the respective championships as there are just three races left in this year’s Grand Final, as they attempt to get their hands on the $750,000 prize pot.

Due to the COVID-19 pandemic, drivers are racing remotely for the first time this year, but the popular live shows continue to be broadcast from the Gfinity Esports Arena in London, as we ensure fans don’t miss a moment of the action.

In the first of Wednesday’s two races, Renault’s Nicolas Longuet took his maiden F1 Esports victory at Silverstone, following a dramatic race at the home of the British Grand Prix. He was pushed all the way to the end by McLaren’s Dani Moreno, who stole P2 outright on the final corner, and Alfa Romeo’s Dani Bereznay, who was bumped up to third after Red Bull’s Frede Rasmussen and Marcel Kiefer were both handed time penalties which meant they dropped further down the field.

Wednesday’s action continued with a trip to Spa, a circuit that is among drivers’ most loved tracks, combining challenging fast corners with long straights, and it did not disappoint. Rasmussen ran out eventual winner, sealing a crucial victory in the race for the title, ahead of Bereznay and Kiefer in second and third respectively.

Event 3 ended at one of Formula 1’s fastest tracks, Monza, as drivers were able to put pedal to the metal for almost the entire lap, giving us some of the quickest lap times we’ve seen this season. Knowing time is running out to pick up wins Ferrari’s David Tonizza gave it all he had to secure victory on the Italian circuit, with Opmeer and Mercedes’ Brendon Leigh rounding off the top three.

The Event 3 results mean Opmeer, Rasmussen, Kiefer and Longuet have a chance to win the title in the final rounds, whilst Alfa Romeo and Red Bull will be fighting to the end to take home the team’s championship this year.

Attention now turns to the Grand Final, on 16-17 December, as drivers take to the track for the last time this year with a double-header at Suzuka and Mexico City, before the season draws to a close at Interlagos, where many real-life world championships have gone down to the wire.

The live show was streamed online via F1’s official channels on Facebook, YouTube, Twitch and Huya, as well as broadcast by international television partners such as ESPN (US), Sky (UK) and Ziggo (Netherlands).

Following a huge year for F1 Esports, which saw over 30 million people tune in to the Virtual Grand Prix Series, more people than ever want to get involved. The second and final dedicated qualifying event for the 2021 F1 Esports Series is now open until the end of November on F1 2020, the newly-released official videogame developed by Codemasters.

“The F1 Esports Series continues to demonstrate the very best of esports, where we are able to put on sensational racing entertainment for our fans, both old and new to the sport, in a safe and secure way. It’s been a terrific showcase all season and with only three races to go, all eyes will be on Jarno Opmeer, Marcel Kiefer and Frede Rasmussen to see who claims the 2020 F1 Esports Series Drivers’ Championship and which F1 team is crowned 2020 F1 Esports Series Constructors’ Champion!”

“Even without the buzz of a packed arena, the competition has been as fierce and competitive as ever. As we enter the business end of the season, all eyes are now on Jarno Opmeer to see if he can bring home his and Alfa Romeo’s first World Championship.”

“This has been another brilliant racing spectacle for fans around the globe to enjoy. Even though the drivers are in different locations around the world, the races and the show oozes competitive tension. The scene is now been set for a stunning climax to the season, with the Gfinity Arena ready to rock. Bring it on!”

For more information on the F1 Esports Series presented by Aramco visit www.f1esports.com.

BETANO will be the official shirt sponsor of Club Atletico Mineiro